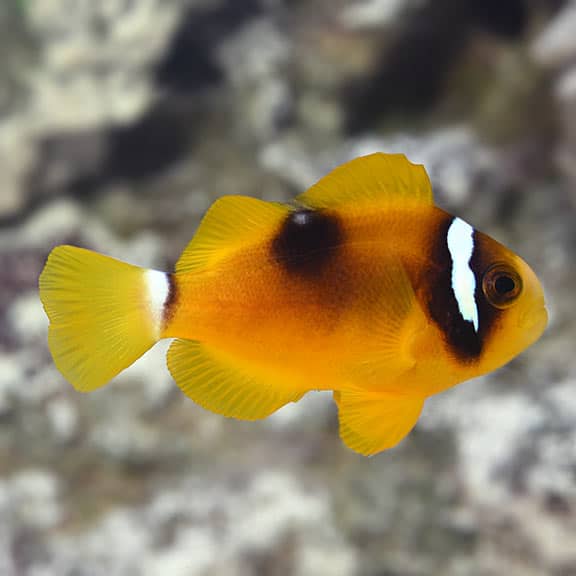 The ORA® The Captive-Bred Deluxe Clownfish can also be called the Clark’s Anemonefish or Clark’s Clownfish. These Deluxe Clarkii Clownfish are prized by their bright yellow coloring as well as their dark black outline and a variety of white stripes. Starting with broken centers, to virtually no stripes at all. As they age the flanks of their bodies fill with black, but their fins are bright yellow. The young fish are yellowish-orange in hue with three white stripes on either side of the body.

It has a distinct advantage over the wild caught species. One of them is that these Captive-Bred Clownfish are very hardy and more used to conditions that are common in aquariums at home. It is an excellent choice for beginners and experienced aquarists alike. The Captive-Bred Clownfish may also be kept alongside several other captive-bred clownfish when introduced to the aquarium simultaneously.

Captive-bred clownfish are simple to breed in your home aquarium. Females will be the biggest of the two, and the two fish are likely to remain close to one another within the aquarium. These fish are egg layers and deposit their eggs on a flat surface and protect the eggs from tankmates. The eggs usually hatch within 6 to 11 days, depending upon the temperatures. The fry should be kept in a separate tank with a diet consisting of baby brine shrimp and rotifers.

Captive-bred Clownfish are omnivores needing both meaty and non-meaty food along with certain greens to supplement their diet. High-quality flakes of marine food that has a high concentration of spirulina algae and frozen and freeze dried foods are a common choice.

The Deluxe Clarkii Clown, a.k.a. Sebae Clown is a stunning Clownfish with a more prominent appearance than other clownfish. The Clowns feature a body that is yellow-orange with vertical white stripes. Clarkii Deluxe Clarkii is coveted for its stunning yellow hue, deep black outlines, and a variety of white stripes.

They are extremely successful in aquariums and are extremely tranquil. They will eat the majority of fish food and are great for aquariums with reef tanks. A number of fish is possible to keep in one tank.

Clownfish possess a distinct swimming style that is distinct from the majority of fish. It is probably passed down through their genetic makeup years of wiggling in the tentacles that belong to Anemones. While the Clownfish moves within its tentacles of Anemones, the stinging mucus may be spread over the body of the Clownfish and helps to shield it from further injuries.

In the wild, they live in small groups that include one dominant female of a large size and a smaller, physically active male, and a couple of males and young ones. When the female is gone, the male with the biggest size will switch sex, and then take over the role of the dominant female. the remaining Clowns climbing the ladder to follow behind it.