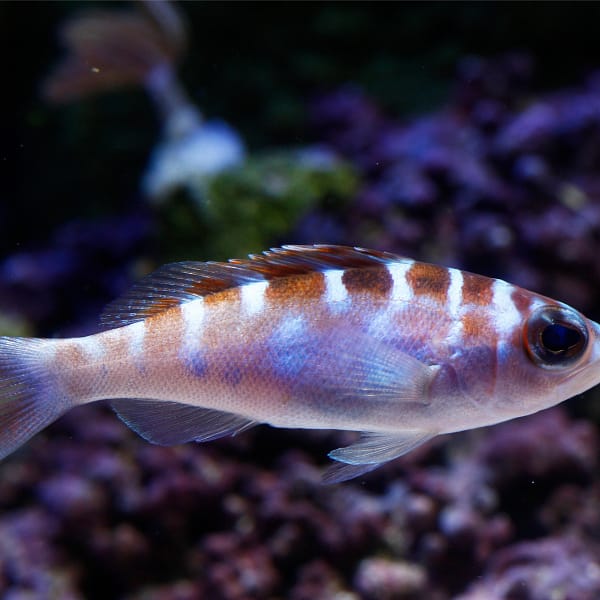 It is recommended that the ORA® Captive-Bred Chalk Bass must be housed in a well-established, 30 gallon or larger aquarium aquascape that is brimming with live rock, live sand as well as plenty of hidden spots. If you’re thinking of keeping a small number of ORA® Captive-Bred Chalk Bass, ensure to put them together in an aquarium of at minimum 100 gallons. This ORA® Captive-Bred Bass timid and cautious fish, which rarely displays aggression toward other fish other than the conspecifics and congeners. Keep this ORA® Captive-Bred Bass with other fish of calm temperament, and do not keep with fish that are more aggressive. This ORA® Cape-Bred Chalk bass isn’t a problem for corals, which makes it a great option for coral reefs in the aquarium. The wild Chalk Bass can be found throughout the Western Atlantic Ocean (including southern Florida, Bahamas, Honduras, and the Virgin Islands) and typically are found on rubble-strewn silty or sandy bottoms in close proximity to reefs.

It is believed that the ORA chalk bass has a big appetite, and therefore it is essential to offer a varied diet which includes vitamin-enriched frozen mysis shrimp and vitamin-enriched brine shrimp that are frozen, as well as other meaty meals, in addition to the highest quality of sea flake as well as marine pellet diet.

This is one of the fish species in aquariums that is frequently ignored by aquarists, even though it can be a valuable addition to hobbyists. The positive aspect is that this fish is very well behaved and is a fantastic addition to any home aquarium.

The fish is found in its home in the Western Atlantic as well as the Caribbean and prefers spending the majority of its time at the sea’s bottom close to the reefs. The Chalk Bass is discovered at depths of up to 400 meters, but is typically found at only the depth of 90 meters. It’s also known by the name of Serranus tortugarum.

It is a tranquil aquarium fish that gets together with more peaceful tank mates, thus making it a nice fish to share with others in the community. Sometimes, however, when the fish has grown too large, it will consume smaller invertebrates such as the Bamboo shrimp, but will only do it in the absence of any other readily available food source.