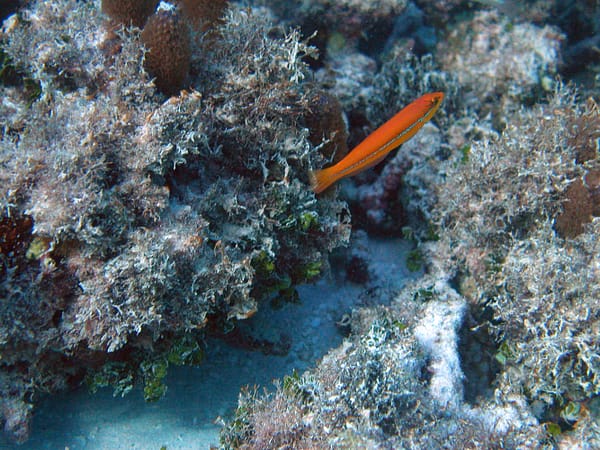 The Neon Wrasse, also known as the Yellowhead Wrasse is among the easiest wrasses to recognize throughout all colors. Adults sport a golden to yellow head and a black vertical bar that runs from the pectoral fin. It is joined with a wide black zone on the upper part that extends up to the caudal pedicle and the caudal fin’s upper part, and blue beneath. Young fish are yellow, with blue-turquoise stripes along their sides. The color-changing characteristic makes Neon Wrasse an enjoyable and interesting fish to watch in your aquarium.

In the wild, the natural range of the Neon Wrasse is confined on its Western Atlantic including Bermuda and southern Florida all the way to the southern part of Brazil. It is a reef-associated species that is found in deep and shallow reefs, as well as on rocky shorelines.

The ideal setting that will work best for Neon Wrasse will be a clean, well-maintained saltwater aquarium that is at least 75 gallons with a lid that is tight. To create the most natural environment in your Neon Wrasse aquascape the entire area with live rock, allowing plenty of nooks and crannies that allow for the Neon Wrasse to investigate, hide and forage to hunt for food. Make sure you include an extensive area of open ground and open areas to swim in. A sandy layer of substrate that is 2-3 inches thick is required to give shelter to the Neon Wrasse when it burrows into the sand in the evening or when scared. Keep the Neon Wrasse in a tank with other peaceful wrasses, such as those belonging to its species. The Neon Wrasse is calm with other fish, however, they are territorial and can be aggressive towards their conspecifics. Therefore, it is recommended to only keep only one Neon Wrasse in your aquarium.

The neon wrasse can be among the easiest wrasses to identify in any color phase. Adults sport a golden to yellow head, with a black vertical stripe that is visible behind the pectoral fin. This bar is joined with a large black area on the upper part and extending towards the caudal peduncle’s top as well as the upper caudal fin, and blue beneath. The juveniles are yellow and have an aqua-blue stripe running across their sides. Aquariums are required in order to house the Neon Wrasse. They’re peaceful with other fish, however, they are territorial, and border on aggressive towards other species, so it is recommended to keep one in each tank. They need ample swimming space and great conditions in the water.