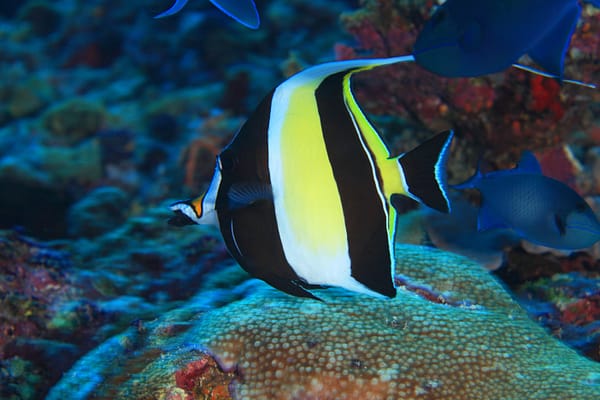 It is the Moorish Idol is also commonly recognized as in Hawaii by the name of “Kihikihi” meaning “curves,” “corners,” or “zigzags,” and refers to its shape and pattern. It is the sole part in the family Zanclidae and is a closely related to those of Tangs as well as Surgeonfish. The most common species of fish, it is located in all of the Indian Ocean, Red Sea and throughout the tropical Pacific. Wild specimens can grow to seven inches in length however, 4 inches is the most likely to be found in aquariums.

It is believed that the Moorish Idol tends to be tranquil. Because of its size, its schooling characteristics, and the need for the space to swim, it needs an aquarium that is at a minimum of 155 gallons. Since its beauty is apparent while swimming, providing ample space is compensated. It’s compatible with the majority of species of fish, as well as larger fish, but it shouldn’t be kept in a tank with corals or polyps, as they will devour. Small invertebrates are at risk too.

The Moorish Idol is a very difficult fish to feed. Live rock with lots of algae and sponges that it could feed can help it to acclimate. Offer a diverse diet consisting of finely chopped fleshy food items such as mysis shrimp, vitamin-rich brine shrimp Spirulina and algae. The diet should be provided frequently throughout the day.

Perhaps the most beautiful of all marine fish for many enthusiasts It is also among the hardest fish to keep as it’s so challenging to feed. For anyone other than the most skilled hobbyist they prefer to admire it in the ocean or at an aquarium for public viewing rather than in a personal tank.

Please note that we promise that ALL aquarium species we sell will arrive in good shape. However, due to the greater degree of maintenance required for this particular species, it was classified as “Expert only.” This species is suggested only for aquarists who are experts or zoos or research institutions. Expert only aquatic life is not covered by our guarantee for a period of time after their arrival.

It is referred to as the Moorish idol (Zanclus cornutus) to refer to the Moors from North Africa, who believe that the fish will bring joy to people who live near it. It is the sole in the Zanclidae family. Zanclidae is close to the tangs or surgeonfish.

The Moorish idol is found across the Red Sea, the Indo-Pacific, and the eastern Pacific oceans. It is reported throughout the western Pacific beginning at Kominato, Japan, down to Lord Howe Island, New Zealand, and within the Eastern Pacific starting from down to the southern Gulf of California down to Peru.