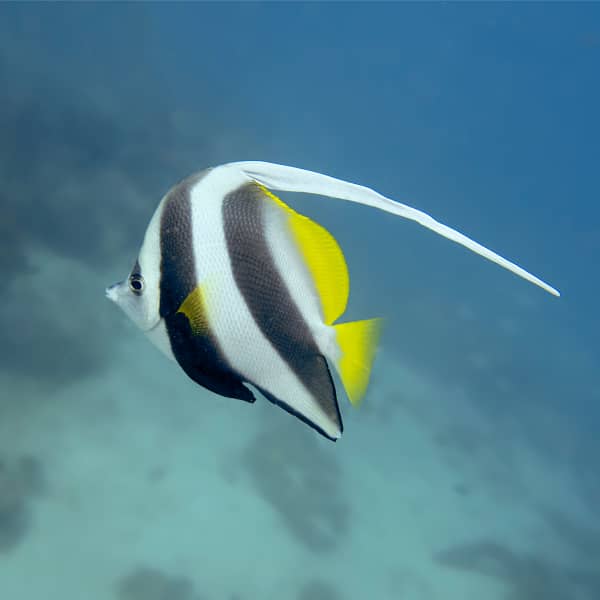 The Heniochus Butterflyfish Black and White often referred to in the field of Longfin Bannerfish, has a extremely elongated white dorsal-fibrillary. Its base color is white, with two broad black stripes. The soft caudal and dorsal fins are yellow. Additionally, there are black spots above the eyes. Fish belonging to the Heniochus genera are usually referred to as Bannerfish in place of Butterflyfish.

The Heniochus Black and White Butterflyfish could be in an 125-gallon or larger aquarium along with other tranquil fish and others from the same species when all of them are placed in the tank simultaneously. While swimming, the white dorsal filament stretches like a banner in the breeze.

This particular species part of Heniochus cannot be considered reef safe. It is a fan of small, meaty food items and herbivore-based preparations.

The Heniochus Black and White Butterflyfish, also referred to by the name of Longfin Bannerfish, has a very long white dorsal elongation. Its base color is white, with two broad black stripes. The soft caudal and dorsal fins are yellow and there are black marks over the eyes. The members belonging to the Heniochus genera are usually referred to as Bannerfish rather than Butterflyfish. Although they are very similar in appearance to Moorish Idol (Zanclus Cornutus) however, the species of this genus aren’t very closely related to it. Butterflyfishes are like smaller forms similar to Angelfish (Pomacanthidae) however, unlike them, they do not have preopercle spines on the Gill Covers. Butterflyfishes typically are between 4.7 inches to 8.7 inches.

It is the Longfin Bannerfish is native to the Indo-Pacific. It could be in a 125-gallon or bigger aquarium along together with peaceful fish and fish belonging to the same species if all of them are introduced to the tank in the same way. While swimming, the dorsal white filament is able to move like an elongated banner that is blown in the wind.

It favors a diet consisting of smaller meaty meals and herbivore dishes.