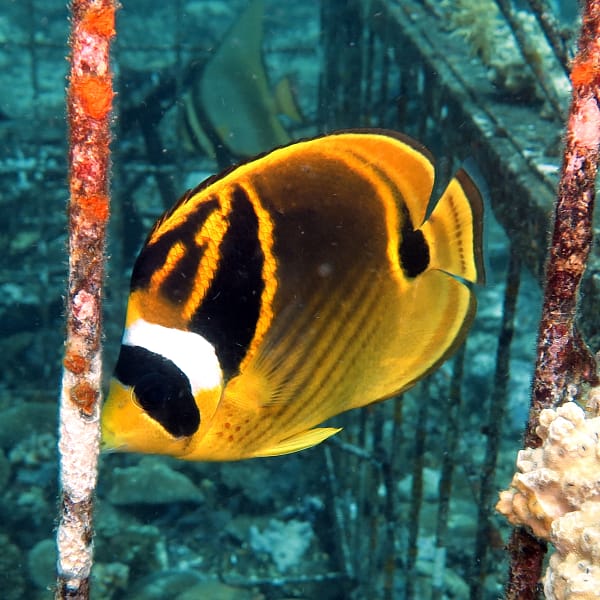 The Raccoon Butterflyfish is yellow-orange, however, it is darker in the upper portion of its body. It has a black spot in the area of its eyes, as well as a wide white stripe running in the posterior. The two black lines bordered by yellow stretch from the white stripe all the way to its dorsal fin.
This Raccoon Butterflyfish is a peaceful fish that can be found in larger tanks of 125 gallons or more aquariums, for fish only, along together with other butterflyfish. It shouldn’t be kept in a tank for reefs as it eats invertebrates and is considered unsafe for corals.

At first, if it doesn’t eat the food, it could be enticed by a tiny anemone. Once it is acclimated, it can be fed a diverse diet consisting of meaty foods such as mysis shrimp, crustacean flesh, and frozen meals throughout the day.

General information about the Raccoon Butterflyfish
The Raccoon Butterflyfish Chaetodon lunula is yellow-orange, however, it is darker on the upper part of the back. It has a black spot in the area of its eyes, as well as an extensive white stripe that runs from its posterior. Two black stripes surrounded by yellow extend from the white stripe all the way to the fins on its dorsal side. This marine fish is a peaceful fish that is best kept in large aquariums for fish only and with other butterflyfish. It is not recommended to keep it in a reef tank as it can eat invertebrates, and is considered to be dangerous with corals.