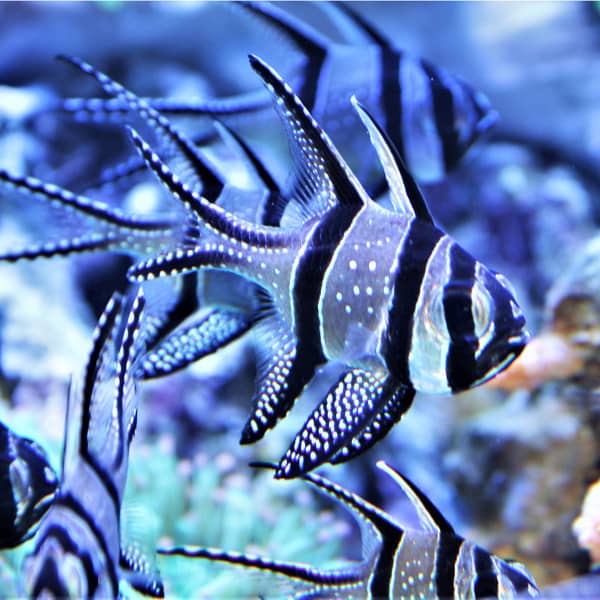 The Kaudern’s Cardinal, which is also called the Banggai Cardinalfish or Longfin Cardinalfish is a stunning fish that has a simple but elegant color scheme and marking. Its body color is a sparkling silver accented by pearly white spots. The bold black stripes on the body accent the fins’ lengths for a beautiful result. We are proud to offer captive bred Kaudern’s Cardinalfish that are reared and bred within Indonesia and Asia which are more durable than wild caught counterparts.
Place the Banggai Cardifish in a well-filtered, 30 gallon aquarium or an even larger that has an aquascape with lots of rock that is alive. Make sure to carefully arrange the aquarium’s landscaping to make plenty of overhangs, caves, and crevices, as well as an area that is open for swimming. Keep the Kaudern’s Cardinal in the tank with tranquil tankmates since it is a slow and deliberate swimmer. A group of Banggai Cardinalfish can be kept in tranquility in larger tanks that have ample areas to swim and hide. The moderate water flow will be appreciated by Banggai Cardinalfish.

It is believed that the Banggai cardinal is relatively easy to breed in an aquarium. After spawning the male will carry eggs in his mouth to guard them against predators.

The Kaudern’s Cardinal must be fed small amounts of food frequently throughout the day. It should be fed a balanced diet that includes frozen brine shrimp that are enriched and mysis shrimp, together with a high-quality flake or marine pellet.

The populations of wild Pterapogon kauderni are threatened in recent times. In 2007, the species was placed on the World Conservation Union IUCN Red List of Threatened Species due the excessive harvesting. Although it hasn’t been added to CITES as of yet, we believe that it’s just the matter of time until the species is declared threatened. We have joined forces with a local fish hatchery, and are can now offer the Banggai Cardinalfish that is raised in tanks to our customers for a reasonable cost. The new specimens raised in tanks are more durable than wild-caught counterparts. The sizes they are shipped aren’t smaller than wild-collected fish, and they are of great color.

Cardinalfish are nocturnal in nature and spend the most time in cooler areas of the aquarium. They will be out at night. They’ll learn to adapt to the brighter, more lit aquarium as time passes. Cardinalfish are often seen in groups in the wild, but they can fight in groups within smaller aquariums. In other circumstances, they can be peacefully surrounded by other non-aggressive fish.

Feed small, meaty meals frozen or finely chopped cooked foods. Cardinals consume small fishes as well as mobile crustaceans found in the wild. If your Cardinalfish seems to be not eating, feed it when the aquarium lights go out. A majority of Cardinalfish exhibit nocturnal habits and would prefer feeding after the lights are turned off inside the aquarium.