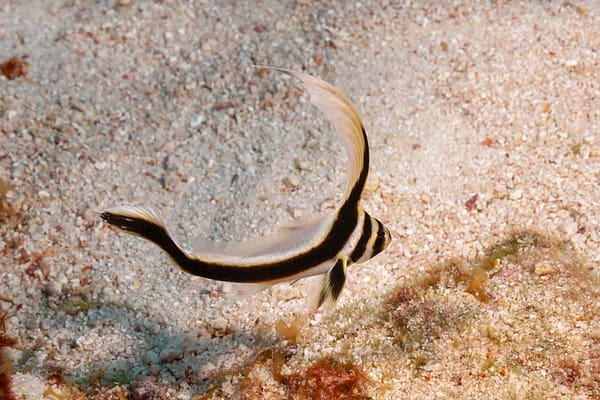 The Jackknife Fish originates in the Caribbean and is a fascinatingly designed fish with long caudal and dorsal fins. The shape of these two fins reminds one of the shapes of a Jackknife and hence the common name. The fish is silver with barred patterns of black. Although they’re not reef-safe, they’re an excellent fish to have in an aquarium that is solely saltwater fish.

It’s best to create a tranquil environment within a 125-gallon or greater aquarium that has a sandy bottom, as well as lots of live rock that can be used as shelters, as well as an additional source of food. If you are planning to incorporate more than one species into your aquarium, ensure that you include them all simultaneously to limit the risk of fighting. It is known to hide in the adjustment of the tank until it feels safe. It is possible that this species eats crustaceans, as well as other motile invertebrates inside reef aquariums.

Regular meals that include an assortment of live food items such as black worms brine shrimp, as well as prepared meaty foods should get the fish out of its hiding. It is believed that the interestingly shaped fish will go through the bottom of the sandy beach searching for crustaceans, worms, and even small fish when it’s hungry. It might even eat the occasional fireworm.

Info about the Jackknife Fish

A Jackknife Fish Equetus lanceolatus can be described as a graceful and shy saltwater fish. They require a tranquil environment with an emerald bottom and plenty of rock areas to conceal themselves in. They feed on the inhabitants of reefs such as ornamental shrimps polychaete worms and other small fish.

The peculiar form that is the Jackknife fish actually functions as an effective method of defending against predators, by causing them to believe that it’s two fishes instead of one. The color of the jackknife fish can also be used to conceal the eyes so that predators are unable to tell what the fish is seeing and may even confuse predators into thinking it’s actually a fish.