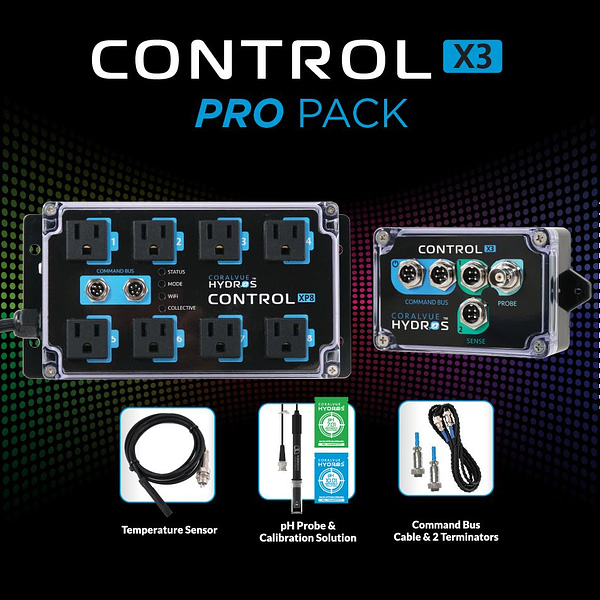 The HYDROS Control X3 Pro Pack includes two Control devices, the Control XP8 and Control X3. Combine these Controls to create a secure and impressive set-up for both saltwater and freshwater aquariums. Connect up to two sensors such as temperature sensors, water level sensors, and leak detectors to the Control X3 and monitor pH or ORP through the available Probe Port. Connect up to eight pieces of aquarium equipment, including heaters, lights, pumps, skimmers, and more, to the 120V AC outlets on the Control XP8. Both devices can send alerts and notifications and connect up to 8 WiFi devices for added modular control on additional equipment like lights, pumps, feeders, and more by simply adding a HYDROS WiFi Power Strip or HYDROS Smart Plug (both sold separately). All HYDROS products are engineered, assembled, and supported in the USA.

The HYDROS Control X3 can connect to two sensor devices including temperature sensors, water level sensors, and leak detectors. The device also includes a Probe Port for monitoring pH or ORP levels. Control X3 can send alerts and notifications through the HYDROS app and with the addition of the HYDROS WiFi Power Strip or HYDROS Smart Plug ( both sold separately) it can also control outlets for lights, pumps, feeders, and more. The Control X3 operates on a HYDROS Safety Net and it is rated IP65 to keep your equipment and aquatic life alive and thriving.

The Sense Port is a new concept in aquarium parameter measurement. HYDROS devices include several Sense Ports. A Sense Port is a generic input port that can accept data from numerous different types of sensors.

One of the most remarkable ports on the HYDROS Control X3 is the Probe Port. You can connect an ORP or a pH probe to the Probe Port but, this is no ordinary pH input! The circuitry is based on an ultra-high-quality input chip specifically designed for these types of probes. Each pH input provides digital galvanic isolation from the rest of the system. Galvanic isolation prevents interference with other accessories connected to the system like motors and pumps. Digital Galvanic isolation preserves the accuracy of the measurement by converting the signal to a digital domain before crossing the isolation threshold.

The HYDROS Control XP8 is an eight 120V AC outlet energy bar and can control eight HYDROS WiFi devices with individual power monitory capabilities. Each of the individually controlled outlets is built into the HYDROS controller for the highest level of security. The two HYDROS Command Bus ports allow for a wired connection to any other HYDROS controllers to form a collective of all Controls in one. All HYDROS products Controls are engineered, assembled, and supported in the USA.

Max Per Relay: 8A
Total Max Amperage: 14A

Versatile and Expandable without Extra Modules

The HYDROS Control X3 and XP8 can be used as a standalone controller for saltwater aquariums, freshwater tanks, pond applications, or they can be added to other HYDROS Controls to build a more extensive system with NO single point of communication failure. Every HYDROS product is a smart device with its own CPU and scheduling capabilities.

What you can expect from your Control X3 and XP8 Control