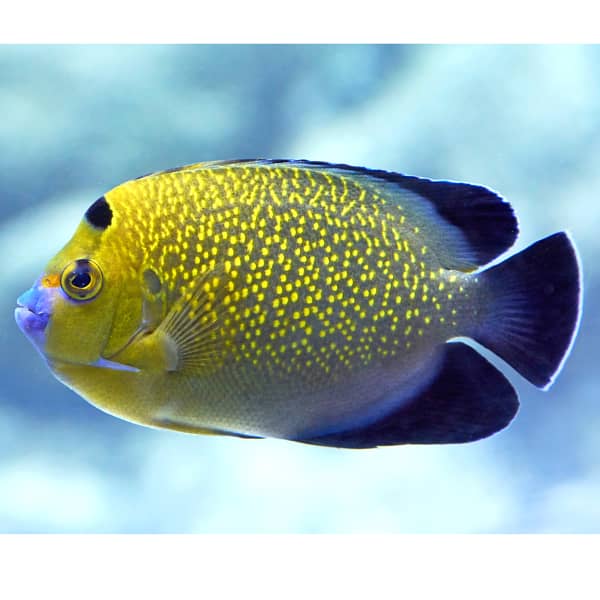 The Goldflake Angelfish, also known as the Gold-spangled Anglefish is a stunning gold-colored fish with beautiful spots across the body. The mouth area of this angel is colored in blue . The fins that are black in hue are surrounded by a stunning blue.
A single Goldflake angelfish will be a great fit in a tank that is at least 125 gallons and lots of hiding spots. Once established it is possible that this Goldflake Angelfish may become territorial. This Angelfish is among the most secure choices among the larger Angels for reef aquariums It has also proven to not eat sessile insects.

It was once a scarce Angelfish for the sport and is now readily available. There is not much information about the reproductive habits of this species of fish.

An extensive diet of angelfish-based preparations as well as marine algae, live rock for grazing and vitamin-fortified shrimp must be offered.

Goldflake angelfish are all-omnivores that feed on seaweeds, benthic algae sponges, zoobenthos, zoobenthos as well as tunicates found in wild. When in captivity a diverse diet of prepared foods is recommended for the health of this aquarium fish. It is recommended to have at least two thirds of their diet is comprised of vegetables, and preferably from live rocks that have plenty of algae growth, with the remainder of their diet comprised of tunicates, sponges and meaty foods like chopped shrimp and fish.

The large angelfish is found in this region of the Pacific Ocean and is widely spread throughout the Gilbert Islands to the Line Islands. They are found particularly in the areas that include Kapingamarangi Atoll (Micronesia), Canton (Kiribati), Nauru, Howland Island and Baker Island, Fanning Island and Christmas Island.