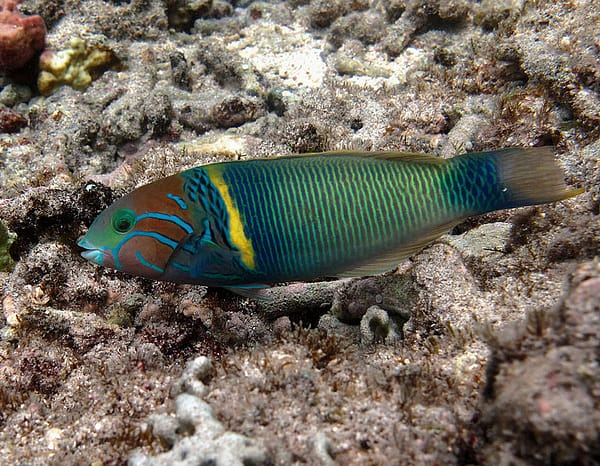 The Goldbar Wrasse is named appropriately for the gold bar, which is subdued and golden, which separates the body and head. Its olive-gold head is veined in contrasting brilliant blue which makes this fish from the Labridae family an attractive feature in almost every aquarium in your home. The Goldbar Wrasse has an appealing purple hazed bluish body that creates visual interest when the active fish swims around live rocks.

Indigenous of the African coasts The Goldbar Wrasse is a favorite in the seaward reefs in low to moderate depth. The Goldbar Wrasse performs well in larger tanks with 125 or more gallons with a wide variety of rock activities, including swimming, hiding, and hunting for food.

Be careful, when relocating Thalassoma Hebraicum in a tank with other fish of the same temperament. While most won’t attack living plants or coral some are territorial and can be aggressive towards new additions to your aquarium. To avoid this you should consider adding the Goldbar Wrasse first.

The Goldbar Wrasse has an elegant golden bar that separates the head and body. The olive-gold head, spliced with a brilliant blue contrast is what makes this fish from the Labridae family a sought-after feature in almost every home aquarium. The Goldbar Wrasse has a striking blueish, purple-hazed body which adds interest to the visual as the fish swims in live rocks. The species is native to the African coasts The Goldbar Wrasse thrives in shallow lagoons as well as seaward reefs that are in superficial to moderately deeper waters. The Goldbar Wrasse does well in larger aquariums with a variety of rock work within which they can swim, hide, or search for food. The Goldbar Wrasse is best kept in a tank alongside fish with similar temperaments. Although they are generally considered coral-friendly, they can be very territorial and may be aggressive towards new corals or plants that have been added to the tank after their introduction. If you’re thinking of adding a new coral to your tank, you might want to introduce it last.