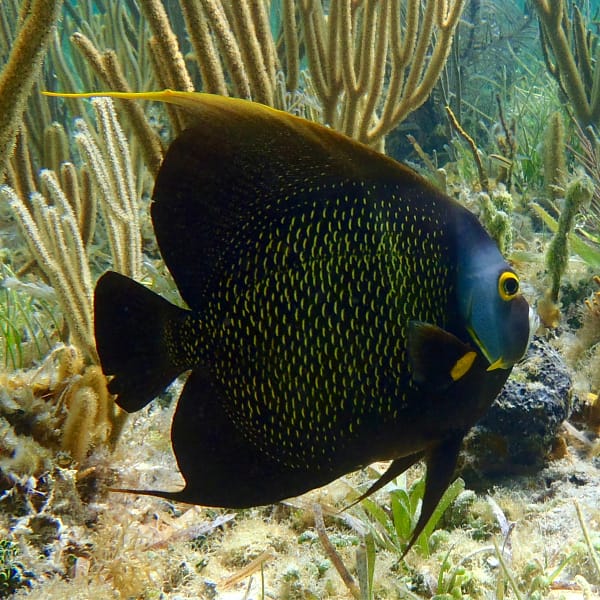 A French Angelfish is among the most popular angelfish types. The face is pale dusky blue with eyes covered in white and yellow. The body is dark blue and has yellow margins of the scale that give the French Angelfish a dappled appearance. A yellow smudge is visible on the pectoral fin. The gill cover is yellow with a yellow edge.
A 250-gallon or larger tank is recommended and should include plenty of live rock to hide and for grazing. A poor choice for reef tanks The French Angelfish is known to nibble at sessile marine invertebrates (soft or stone corals) and clam mantles and is also known to dominate the water.

The diet of French Angelfish should comprise of Spirulina as well as marine algae. occasionally, high-quality angelfish recipes that contain sponge matter and mysis, or frozen shrimp. It is recommended to feed it at least 3 times per day.

The Small Juvenile is likely to have the Juvenile coloring or change color to an adult in the teen years while the Medium is a sub-adult and the Large colored in Adult coloration.

The French Angelfish is among the most well-known angelfish species. The face is pale dusky blue with eyes covered in white and yellow. The body is dark blue that has an orange scale border that gives the French Angelfish the appearance of dappled yellow smudge marks on the pectoral fin, while the gill cover is yellow with a border. A large tank must be available and contain large quantities of live rock for grazing and hiding. It is not a suitable candidate for reef tanks the French Angelfish is known to bite sessile marine invertebrates (soft as well as stony corals) as well as clam mantles. It is also known to take over the aquarium. The Small Juvenile is likely to have the juvenile coloration or could shift color towards sexual maturity colors. The Medium is a sub-adult and the Large with Adult coloration.

French Angelfish Diet & Nutrition
Pomacanthus paru are mostly an omnivore that feeds on algae and sponges. In the wild, they also consume zoanthids, bryozoans, tunicates, and gorgonians. In tanks, young French angelfishes are fed a mix of detritus and algae, while an adult is recommended to be fed a food mixture that includes sponges and vegetables. Feeding should be performed at least four times per day because of their continuous nature of grazing when in nature.

French Angelfish Origin
This fish species can be found in the western region of the Atlantic Ocean from Florida to Brazil. Its range also covers that of the Gulf of Mexico and the Caribbean Sea, including the Antilles.