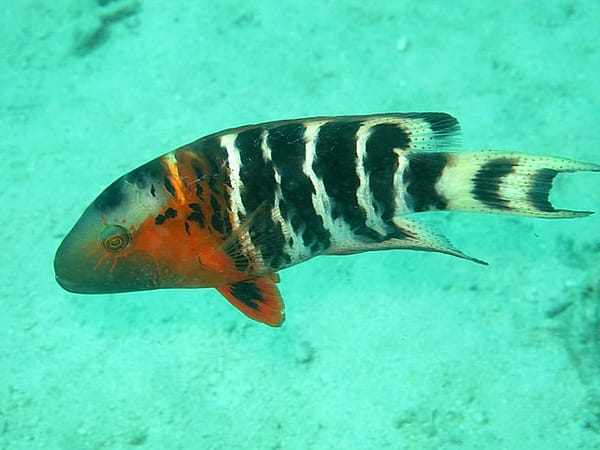 A Choat’s red leopard Wrasse is also called the Choati Wrasse is located in the eastern part of the Australian Coast in southern parts of the Great Barrier Reef and northern New South Wales. They differ in appearance according to their age and sex. Adults have white bodies with red/orange spots and a heavy red stripe around their faces. They also have a yellow patch with a blue/green outline on their operculum and gill covers. Younger Choati Red Leopard Wrasse sport transparent white bodies with some orange patches. Terminal phase males are different from females in having bright colored faces with orange blotches and green alternating patterns, as well as yellow lips.

Like the other members of Genus Macropharyngodon These fishes require an extremely fine, sandy substrate since they sleep in their beds at night to guard themselves. They require a well-established aquarium since they seek out small crustaceans during the day.

Leopard Wrasse can be a challenge for fish to adjust to a tank environment however, under the care of an advanced aquarist, who can provide these fish with the right conditions and care they will flourish and provide a spectacular display. It is recommended to introduce Leopard Wrasse into the aquarium before any bigger or active fish are brought in, to allow them plenty of time to adjust and adjust to their new surroundings, and begin feeding on freshly prepared meals effectively. If you want to maintain the population of these fish, introducing them in the display at the same time is the ideal way to go. As with other Labroids, these fishes are able to switch sex. For instance, the dominant fishes in the group may change into completely functioning males.

We are able to assure you that ALL aquatic species we provide will be alive and in good health. However, due to the greater degree of attention required for this specific species, it is classified as “Expert only.” This species is only recommended to the aquarist who is an expert or zoo institution. Expert only aquatic life is not covered by our warranty after arrival.

The red-spotted hue of this Choati Leopard wrasse is an impressive addition to any aquarium that is a fish-only or reef-based community aquarium. This Choati Leopard Wrasse is similar in food requirements to Mandarin Dragonettes and will spend the day searching for copepods as well as other small crustaceans that appear to be microscopic. These crustaceans are only present in aquariums with a good reputation and to maintain the Choati wrasse healthy, the number of these small creatures needs to be kept. It is suggested to install either a sump or a refugium that provides a secure environment for copepods and tiny crustaceans to reproduce without fear of predation.

Feed your fish a varied diet comprised of large pieces of meaty food items. Include small pieces of Krill, table shrimp that is raw as well as squid, clam, and mussels. They will learn to adjust to their diet in captivity and will likely complement the diet of captives by eating copepods and amphipods (small animal-like fleas that grow in well-established aquariums. The supply from these creatures will be in line when accompanied by the refugee or sump).