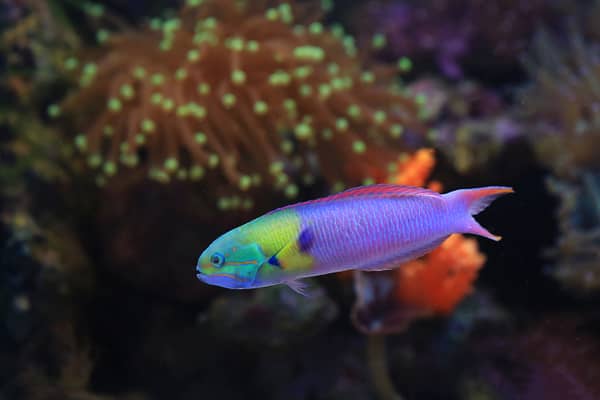 Blunthead is a stunning multicolored wrasse that can be identified due to its unique head shape. Contrary to the majority of wrasses, the Blunthead Wrasse is distinguished by its attractively sharply rounded or blunted head which is enhanced with its sleek, rod-shaped physique. Like many species of wrasses, the Blunthead Wrasse displays remarkable color variation among individuals, depending on gender and age.

The Blunthead Wrasse which is also known by the name of Rainbow Wrasse, transforms from an uninteresting fish to an attractive fish, showing the striking change in shades. In the beginning, male and female Blunthead Wrasses are almost alike. Dark brown and black stripe which has uneven edges runs across the body’s long length. The dark stripe is across the entire dorsal part of the body along with the bright orange visible at the peduncle alters the white coloration of males and females. As they mature, male Blunthead Wrasses flower with vivid hues. The frontal region transforms into breathtaking blue-green hues, which turn into a vivid yellow. A stunning red body adds the effect of a rainbow.

The Thalassoma amblycephalum must be kept in a 75 gallon or more aquarium with live rock areas to conceal in and a substrate that could be utilized to dig into at night. Along with many hiding places and open spaces, an enormous space is required to accommodate the fast-swimmers and lively Blunthead Wrasse. If aquariums are big with plenty of first-phase and juvenile Blunthead Wrasse are able to be kept at peace. As the adult Blunthead Wrasse grows older it becomes more aggressive and should be kept as a single in a FOWLR (Fish Only with Live Rock) aquarium, with companions who are friendly.

Bluehead Wrasse is a carnivore that has an omnivorous diet of Zooplankton which includes crustacean larvae. Its diet should include mysis shrimp, vitamin-rich frozen brine shrimp,  meaty meals, premium marine flake, and marine pellet as well as other foods.

Blunthead Wrasse is distinguished by its aesthetically sharp or round head which is accentuated by its rod-shaped body. As with other species of wrasse, the Blunthead Wrasse displays notable color differences between them, depending on gender and age. This Blunthead Wrasse is transformed from an uninteresting fish to an impressive fish, sporting stunning variations of vibrant colors. In the beginning, male and female Blunthead Wrasses are nearly the same. A dark brown stripe with uneven edges extends across the body. The dark stripe is across the entire dorsal region as well as the orange flash visible in the peduncle ruins the white primary coloring of both female and male Blunthead Wrasses. When they reach adulthood, male Blunthead Wrasses are seen to bloom with vivid hues. The frontal region develops beautiful blue-green colors that transform into stunning yellow. A black body makes up the last element of this stunning rainbow-like effect. It is believed that the Blunthead Wrasse needs to be kept within 75-gallon or more of an aquarium with plenty of live rock to hide in as well as a sandy substrate to crawl into in the evening. In addition to plenty of space to hide in, an open area is necessary to accommodate the swimmers who are fast and lively Blunthead Wrasse. In large aquariums, a variety of starting stages and young Blunthead Wrasse are able to be kept in relative peace. As they age they show more aggression and must be kept as one in ta Fish Only With Live Rock aquarium that is populated with friendly tankmates.