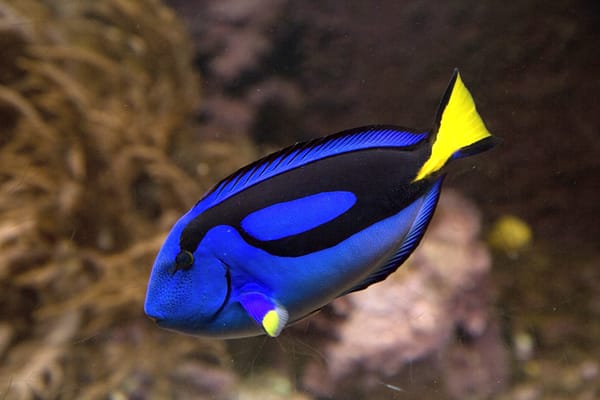 Are you just beginning to learn about the hobby? Blue Tangs should be taken care of in aquariums that are that are at least 6 feet long by skilled aquarium owners who are marine (saltwater) aquarists. If you’re just beginning or novice, we suggest a similar fish like that of the Marine (Saltwater) Yellowtail Damselfish, or Freshwater Boesemani Rainbow.

Blue Tang Blue Tang boasts a vibrant electric blue body adorned with striking black markings. Actually, the black, which begins near the eyes, traces the dorsal lines down to the tail and goes back above the pectoral fin, creating an unusual shape that resembles an artist’s palette. This is the reason it is known as the Blue Tang is also known as the Palette Surgeonfish. It’s also known as the Pacific Blue Tang, and Hepatus or Regal Tang. Whatever the name the Paracanthurus Hepatus is an equal amount of beauty and peace which is suitable for almost any communal marine aquarium.

The Blue Tang is native to reefs throughout the Indo-Pacific In the Indo-Pacific, the Blue Tang relishes a good hideaway among live rock. However, this fish also likes to swim. So, plenty of room to move around the aquarium is vital for optimal health. While it may be peaceful around its tankmates but it is not a peaceful species. Pacific Blue will become aggressive toward other fish in their own kind. To ensure that you have several specimens, you can introduce all of them in one go into an entire marine system.

Although Blue Tangs are known to eat meaty food alongside many other aquarium fish, it’s crucial that they receive ample amounts of seaweed that is marine-based and algae. This will boost the immune system of Blue Tangs as well as reduce aggression and improve the overall condition of their health. Provide dried seaweed that is tied to a stone or a veggie clip and feed them at least three times a week. Sea Veggies, Seaweed Salad, and Ocean Nutrition are all ideal products and are extremely simple to use.

The proper care for Blue Tangs is a must. Blue Tang requires a slightly greater amount of focus and dedication since it is more vulnerable to lateral line diseases, fin erosion Ich and various skin parasites than a lot of other fish. Make sure you have the best water quality along with a balanced diet with plenty of nutritious marine-based vegetables to maintain the Blue Tang in optimal health.

The blue tangis scientifically identified as paracanthrus Hepatus, is a tiny, vibrantly colored fish that is native to coral reefs of the Pacific Oceans in the Indo-Pacific. Blue tangs have number of common names, including Hippo tang, Pale surgeonfish Pacific royal blue tang, and blue surgeonfish.

Blue tangs are a common sight due to the well-known Disney characters, Dory of “Finding Nemo” and “Finding Dory”. Blue tangs are distinguished by an emerald blue body as well as a yellow tail. They also have a black-colored palette on their bodies (usually with the form of the numeral 6). Adult blue tangs may grow as long as 10-12 inches and weigh up to 1.3 pounds, males tend to be heavier than females.

This fish has a flat body, with an oval-shaped body small scales, and a nose that is slightly pointed. Blue tangs are known as surgeonfish due to the sharp spines that resemble scalpels on the sides and the top of their body.