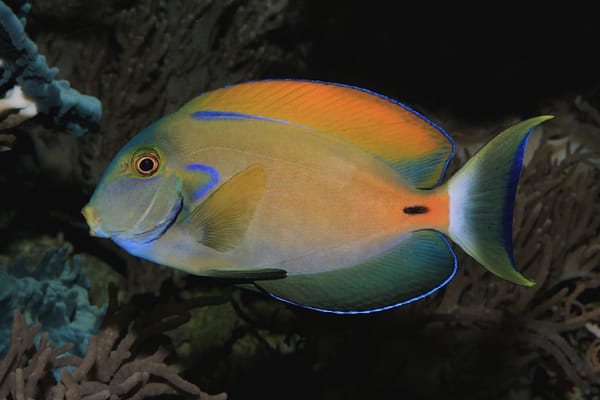 The Fowleri Tang, also known as the Blackspine Surgeonfish, is one of the most beautiful tropical Tangs. Blue heads with distinctive lines that arc behind the eyes makes this species stand out from other Tangs. A brown body, a yellow dorsal fin, and white lyre accents on the tail are also part of this specimen absolutely unique.

In its natural habitat, the Fowleri Tang is generally found in sea-ward clear reefs and drop-offs. A 360 gallon or greater established aquarium that has large quantities of living rock are required to allow ample swimming space and areas in the rock.

Though tangs can consume meaty foods together with others in aquariums, it’s crucial that they get ample amounts of seaweed that is marine-based and algae. This will boost the immune system and lessen aggression and improve overall health. Give dried seaweed that is tied to a rock, or the veggie clip, and feed them at least three times a week. Sea Veggies, Seaweed Salad, and Ocean Nutrition are all ideal products and very simple to make use of. They are excellent to control algae in aquariums for reef fish and saltwater fish.

The Fowleri Tang is one of the most beautiful tropical Tangs. A blue head that has distinctive lines that arc behind the eyes makes this species stand out from other Tangs. A brown body, a yellow dorsal fin, and a white and lyre-like tail add to the appeal of this species. truly distinctive. Its natural environment in the wild is generally found in sea-ward clear reefs and drop-offs. An extremely large, established aquarium that has a lot of live rocks is required to give ample swimming space as well as zones inside the living rock. These fish are fantastic to control algae in saltwater aquariums or reef aquariums.