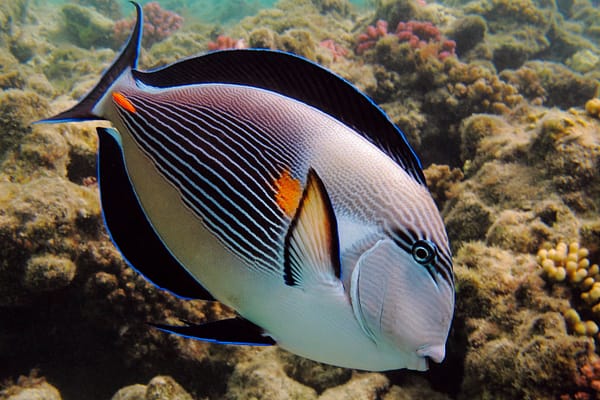 Sohal Tang is a hardy and generally reef-safe fish, but it can be a challenge because of its size and its aggressive nature. The attractive beauty of the Sohal’s the vermiculated, contrasting stripes that alternate between light and dark, with its fins being jet black, with electric blue in the middle. There’s also an orange patch post gill plates and on the peduncle, where the sharp boney “scalpel” is located.

Sohal Tangs are very aggressive and should never be kept in a group with other Tangs. They usually get along with their tank mates from the past, but they can be quite hostile to new additions. They’re best suited to large aquariums that have other fish that can handle their domineering and aggressive behaviour. They are great in huge reef systems, with no other Tangs and plenty of room for swimming. It is suggested that they are the last fish to be introduced into the aquarium as they are extremely territorial and aggressive with tank friends. Because of its potential for large dimensions of 14-16 inches, an aquarium that is 250 gallons or more is required to adequately house the Sohal Tang.

While Tangs are known to eat meaty food such as enriched brine or mysis shrimps, it’s suggested that Tangs get plenty of marine-based seaweed and algae. The diet of algae is essential for Sohal’s overall well-being and longevity and must be fed frequently. Flake and pellets of high-quality foods are also acceptable.

It is located throughout its home in the Red Sea, to the Persian Gulf, and the Arabian Sea, sometimes in large groups, but mostly in solitude. The majority of these fish live on the plateau of reefs just prior to the slope. They are typically located in shallow depths less than 20 meters (65′). Wild Sohal Tang (Acanthurus sohal) specimens can increase to 16 inches in aquariums, the adults usually grow from seven to 10 inches. It is believed that the Sohal Tang is hardy, but is susceptible to a disease called Lateral Line erosion, or a Hole in the Head. A diet rich in vegetarian vitamin A, particularly beta-carotene, can help in preventing the development of the condition. In addition, voltage spikes in the brain are believed to be responsible for this illness as well as the probe for grounding might prove beneficial. Sohal Tangs are extremely aggressive. They shouldn’t be kept alongside other Tangs or species of Wrasse. They usually behave well with tank mates who are old however they will try to kill newcomers. They’re best suited to large aquariums that have other aggressive fish. They can be found in huge reef systems without other Tangs as well as plenty of room to swim. The blue outline on the fins and horizontal striping of the body makes them a striking sight. Due to its aggression and its size, the fish is best to be handled by an experienced aquarist who has an extensive reef tank.