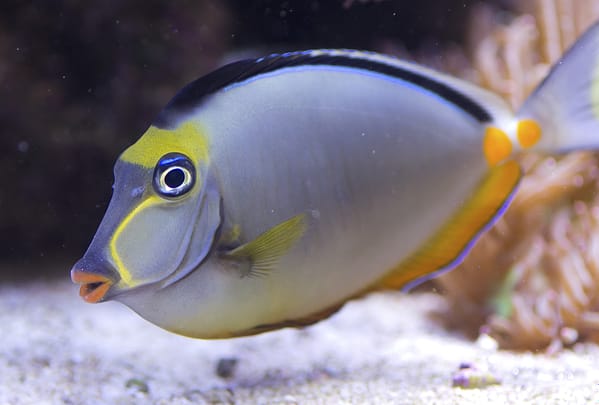 Naso Tang, also known as the Orangespine Unicornfish, darkens with the onset of maturity. Naso Tangs that originate from Hawaii are typically more vividly colored than the ones found in other locations. When they are young the Naso Tang from Hawaii is dark gray, with an elongated blue stripe that runs through the dorsal fin, and an orange stripe on the fin’s anal. After maturation, the body develops an orange-reddish brown tone, along with youthful striping gets added with more color. The tail develops the shape of a lyre, which is accompanied by the vertical bars of yellow toward the back. Two orange patches appear on the peduncles’ spines close to the tail. The face is the most dramatic alteration. A black, thin mask is formed between the mouth and the eyes. The mask is highlighted by bright yellow, and the lips develop a orange-reddish hue.

A 180-gallon or larger aquarium is required to give ample swimming space, as well as places to hide and hide, with a secure lid that prevents leaping to escape. It can be aggressive with other tangs, but tranquil with the other fish within the tank.

While Tangs can eat meaty foods alongside others in aquariums, it’s essential that they get ample amounts of seaweed that is marine-based and algae. This can strengthen its immune system and decrease aggression and improve overall health. Give dried seaweed that is tied to a rock, or the veggie clip and feed them three times a week. Sea Veggies, Seaweed Salad, and Ocean Nutrition are all ideal products that are easy to prepare.

The Naso Tang darkens with maturity. Naso Tangs that come from Hawaii are typically more vividly colored than those from other locations. When they are young Naso Tangs are typically brighter than other species. Naso Tang from Hawaii is dark gray, with the blue stripe running through the dorsal fin, as well as an orange stripe along the anterior fin. As it matures the body develops a reddish-brown hue, as well as the stripe that was formed in juvenile form, gets enhanced by a different color. The tail develops an lyre-like shape, with an orange vertical bar that runs toward the back. Two orange patches appear on the peduncle spines, close to the tail. The face is the most dramatic alteration. A thin, black face mask is formed between the mouth and the eyes. The mask is covered by bright yellow, and the lips take on an orange-reddish color. A large tank is required to allow plenty of space for swimming as well as places to hide in a lid that is tight that prevents the tang from jumping out to escape. It can be aggressive with other tangs but is calm with other fish in the tank.