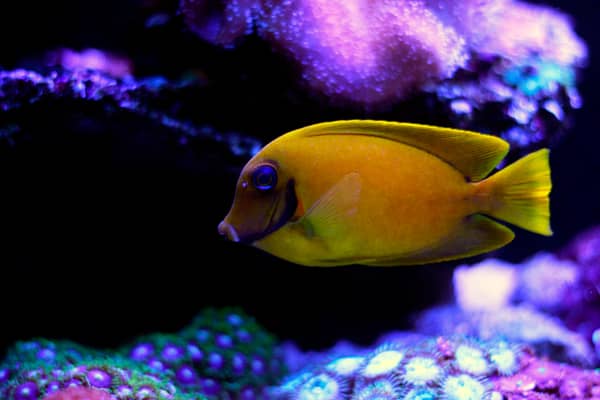 Mimic Lemon Peel Tang, often referred to in the form of the Mimic Surgeon, or Chocolate Surgeonfish is an oval body with a yellow color as the fish is still a juvenile. It is blue with highlights around the eyes and gill covers similar to those of the Lemonpeel Angelfish (Centropyge flavissimus). (Many species of Acanthurus species. emulate angelfish.) As they mature the body color becomes darker and ebony with red highlights emerging around the pectoral and eyes. The dorsal and anal and caudal fins are given the green hue but they are still tipped with dark tan color of the body.

A 125-gallon or bigger aquarium that has large amounts of live rock to give ample swimming space and a variety of areas in the rock. It can be aggressive to the other Tangs and Surgeonfish however, it is calm with other species of fish.

While Tangs are known to eat meaty food as do others in aquariums, it’s essential that they get ample amounts of seaweed that is marine-based and algae. This will boost the immune system of Tangs, decrease aggression and improve overall health. Give dried seaweed that you tie to a rock , or the veggie clip and feed them at least three times a week. Sea Veggies, Seaweed Salad and Ocean Nutrition are all ideal products that are easy to apply. These are fantastic fish to control algae in saltwater aquariums or the reef aquarium.

The Mimic Lemon Peel Tang has an oval body with yellow color as an adult. It features blue highlights around its eyes as well as a gill cover like those of the Lemonpeel Angelfish (Centropyge flavissimus). (Many from the Acanthurus species. are akin to angelfish.) Once mature the body color turns dark and ebony with red highlights appearing in the eye area and the pectoral fins. The dorsal and anal and caudal fins are given green hues, however, they remain tipped with the dark tan body color. An aquarium that is large and has large quantities of live rocks is essential to give ample swimming space and also areas inside the living rock. It can be aggressive with the other Tangs and Surgeonfish however, it is tranquil among other species of fish. They are excellent fish to manage algae in a saltwater aquarium, or the reef aquarium”