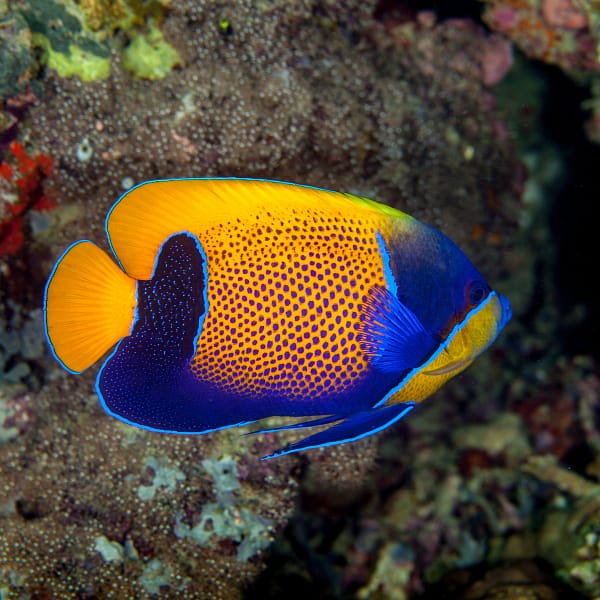 The Blue Girdled Angelfish, also known as The Majestic Angelfish, has yellow scales that have blue margins. They also have an elongated dark blue band or girdle, which is affixed to faces and extends to the back. This girdle gets highlighted in bright blue borders.
Although a little shy, this angelfish is one of the most easy angelfishes to maintain. It needs a tank of at least 180 gallons with multiple hiding spots as well as live rock to graze. A Blue Girdled Angelfish is not an ideal reef dweller because it can be prone to nip at soft and stony corals (sessile invertebrates) and mantles of clams. It is generally not harmful to small-polyped corals or harmful soft corals.

The diet of Blue Girdled Angelfish must comprise vegetable matter, such as Spirulina or marine algae fleshy food items like mysis shrimp and premium angelfish dishes that contain sponges.

The Blue Girdled Angelfish has yellow scales that have blue margins, and an elongated dark blue band called a girdle, which is affixed to its face and extends to the back. The girdle is accentuated with bright blue borders. Although it is a bit timid, this angel is among the most easy fish to care for. It requires a huge tank size with plenty of hiding places and live rock to graze. A Blue Girdled Angelfish is not an ideal reef dweller as it is prone to nibble at soft and stony corals (sessile invertebrates) and mantles from clams. The majority of the time, it will not cause harm to small-polyped stony corals and may to toxic soft corals.

Blue Girdled Angelfish Diet & Nutrition
The diet of the Blue Girdled Angelfish consists of tunicates and sponges, however, it is thought to be an Omnivore. In captivity, the species could be fed a variety of vegetable-based foods as well as meaty food made from finely chopped shrimp, and scallop along with the sponges and tunicates.

Blue Girdled Angelfish Origin
The species is present all over the Indo-Pacific region, from Indonesia to Papua New Guinea, north to the Philippines, and south to Rowley Shoals and the southern Great Barrier Reef, including Palau and Yap in Micronesia.