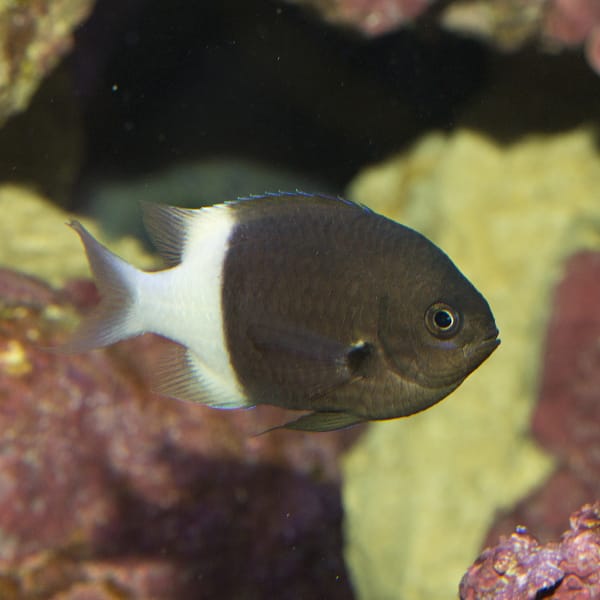 The Black & White Chromis range from Christmas Island and northwestern Australia up to northwestern Australia to French Polynesian as well as the French Polynesian Line Islands. They are mostly black, with the caudal peduncle and the caudal fin becoming white. These fishes are among the most tranquil of the species of damselfish, and are a great addition to reef as well as fish-only aquariums.

This species can be found in small aquariums that are minimum 30 to 40 gallons or more. When trying to keep a group of these fishes, it is best to make sure they have enough space in an aquarium of about four feet in length.

The Black and White Chromis is fed a diverse diet consisting of meaty and fatty foods including enriched brine, small mysis shrimps, herbivore recipes as well as marine flaked foods.

An easy fish to care for that is able to school well is the Black and White Chromis. This semi-aggressive species is quick to adjust to the new environment and is very durable and therefore an ideal choice for anyone who is a hobbyist. Include plenty of rock decorations and live plants for this fish to conceal and swim through. It is hard to tell the difference between males and females. The male tends to be bigger and can become more aggressive with females once it is time to breed. Similar to other damsels, the male is the one responsible for caring for the eggs, and is very aggressive while protecting his brood. This Black & White Chromis’ diet should include nutritious meaty meals that are vitamin rich and flake or pellet foods that are suitable for marine fish. They are around 3″ and can be placed in a group at the same time. They can be found in the Pacific Ocean in small schools on coral reefs along the coast as deep as 20 meters.