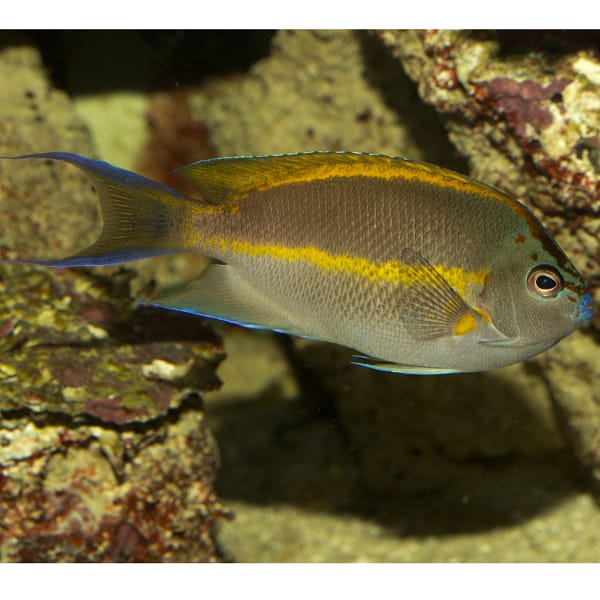 Bellus Angelfish should be kept as a male-female couple or small harem with one or two females in an aquarium of 125 gallons. They would also make a great addition to a deep-water reef aquarium. A dimly lit tank will facilitate acclimation, but these fishes seem well-suited to the intense lighting of modern reef aquariums. A tank should provide multiple hiding spots and live rocks for grazing. Two males should not be kept in the same tank, as this will lead to fighting.

Bellus Angelfish are hermaphroditic. They can change their sex from females to males, and even revert back into females if they are not around females. These fish are hard to breed but many experienced aquarists have observed them spawning in large aquariums.

There are many meaty options, such as
Vitamin enriched frozen brine shrimp, as well as spirulinas, marine algae preparations and high-quality angelfish dishes, mysis and frozen shrimp will provide good nutrition.

Information about Bellus Angelfish
Bellus Angelfish is the only angelfish that displays sexual dimorphism. The male is an iridescent, pale blue and white fish. It has a lower body with anal fins highlighted by horizontal blue stripes. One yellow to orange stripe extends toward the caudal and borders the dorsal fin. The female is iridescent and pale blue-black with a yellow/orange lateral stripe and dorsal fin. Bellus Angelfish can be housed in small groups, such as a male-female couple or a small harem with a few females. They are great candidates for deep-water reef aquariums. Although bellus angelfish will need to be kept in a dimly lit tank to ease their adjustment, these fishes are able to adjust to the bright lights of modern reef aquariums. Multiple hiding spots and live rock should be available for the fish to graze in. Fighting can ensue if you keep two males in one tank.

Diet of Bellus Angelfish
Bellus angelfish is a planktivore that eats zooplankton, marine algae and zooplankton. It is also known to eat bryozoans, polychaetes, and other benthic invertebrates. They will accept prepared frozen food made of mysis, brine shrimp, shellfish, and Spirulina in captivity.