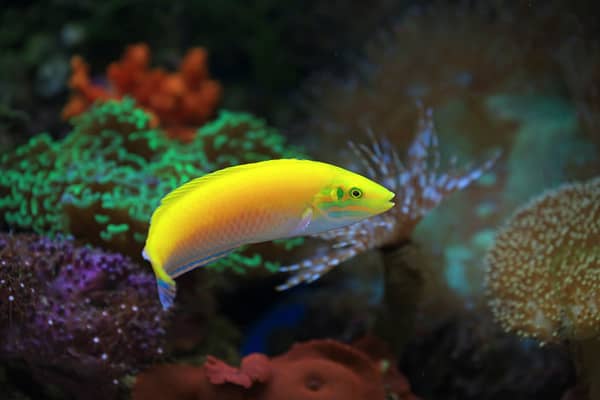 This Banana Wrasse is also known as the Yellow-brown Wrasse, Sunset Wrasse, or Yellow Wrasse. When it reaches the age of adulthood the wrasse takes on an appearance of yellow if female and blue if male. Both sexes have facial markings of green as well as thin vertical stripes across the body. The fins are vibrantly identified.

It should be kept in a 125-gallon or bigger aquarium, along with other tank mates who are aggressive including Puffers, Tangs, smaller Triggers, and Angels. They are active fish that require plenty of rock to hide in as well as a secure lid. It can be territorial and resent any new members of the group, so it should be added at the end of the tank. It can be kept in a pair, in the case of an aquarium that is larger than 125 gallons. It can consume bristle worms and mantis shrimp. It is not known to consume live corals or plants.

It is recommended that the Banana Wrasse diet comprise mysis shrimp with vitamin enrichment frozen and vitamin-enriched brine shrimp that are frozen, as well as other meaty food items, along with high quality marine flake as well as marine pellets.

The Banana Wrasse, as an adult, appears yellow for females and a blue look for males. Both genders are marked on their faces with green color and fine vertical stripes along the body. The fins are extremely colorful. They should be kept in an aquarium that is large along with other aggressive tank mates like Tangs or Puffers, as well as small Triggers and Angels. They are active fish that require lots of rocks to hide as well as a lid that is tight. The fish will turn territorial and snarl at any new members of the group, so it should be added at the end of the tank. It is likely to devour bristleworms or mantis shrimp. It doesn’t consume live corals and live plant species.