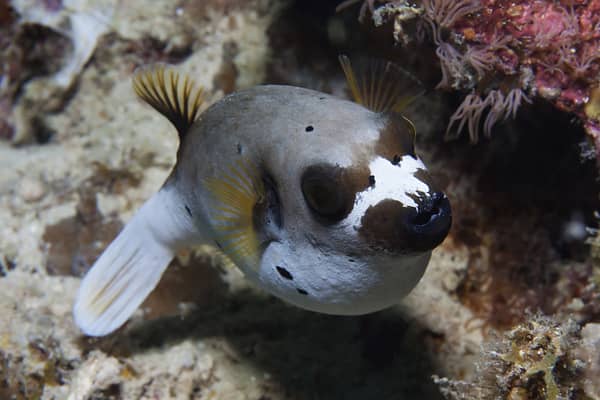 The Arothron Dog-Face Puffer often referred to as The Blackspotted Puffer, gets its name because of its resemblance to dogs. Its appearance changes during various phases of its life. When it is in its gray stage, it appears gray, with black markings on the mouth, eyes, and dorsal fin. The pectoral fins are an appearance that is yellow. The half-yellow stage is identified by the yellow underbelly and the overcoat of dark gray, and the face appears like the gray one. There may be spots of black on the body and could be yellow or gray. It rarely alters its color within an aquarium.

The Arothron Dog Face Puffer does not have pelvic fins, however, it is extremely maneuverable due to its dorsal, pectoral, and anterior fins. It is not “teeth,” it has an elongated beak-like structure that can be used to crush prey.

A 100 gallon or more carnivore aquarium that is exclusively fish-based is ideal. Arothron Dog Face Puffer is an excellent tank addition because of its personality and distinctive appearance. It is able to eat invertebrates inside a reef tank. It is tolerant of other Puffers that aren’t more aggressive than it is. It’s timid at first, but then gets scared when placed in a net. Therefore, utilize a container for transferring it.

The Arothron Dog Face Puffer requires a variety of meaty meals, such as shrimp, krill, squid, and hard-shelled shrimp, to reduce the size of their expanding teeth.

The Dogface Pufferfish is aptly named not just for its appearance, but also for its behavior. The fish isn’t known for its aggression and is ideal for environments that are not reefs since it can eat corals, crustaceans as well as other invertebrate creatures. The fish typically has scattered dark spots on its body, ranging that range from grays to browns yellows and rare black gold, or orange. A variety of species can be housed inside an aquarium.

In the event of distress or fear, Pufferfish can inflate over two times their size. Intentionally enticed by this behavior can eventually result in illness or death. Offer lots of live rock in order to ensure that the growing teeth are in good condition or to clean.

Although reluctant to eat and refusing food at the first meeting, it will soon be brave, even if it isn’t completely spoiled. It will eventually beg for food, just like any dog who asks for scraps from the table. Wild, Pufferfish are typically hunter-gatherers at night.

Feed your dog puffer a varied diet composed of large pieces of meaty meals. The most common of these are krill seafood that is raw, table shrimp mussel, and clam. It’s also a good idea to supplement its diet with a herbivore diet.