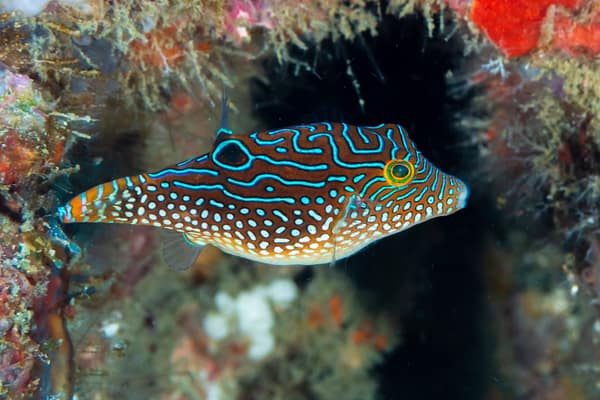 A 50-gallon or greater aquarium that is exclusively for fish is ideal. The teeth of this fish actually form the result of a fused beak structure. It could eat invertebrates within a reef aquarium. It gets scared when placed inside a net. Hence it is recommended to use a container to move it.

A Blue Spotted Puffer’s diet demands an extensive diet of meaty foods, such as the clams, squid, and krill along with hard-shelled shrimp, to aid in the wear and tear of their growing teeth.

The Blue Spot Puffer, Canthigaster papau is often referred to by the name of Hawaiian Blue Puffer or the Blue Spotted Sharpnose, has an enthralling personality. It is a fantastic fish to keep in a tank that is exclusively for fish. The body of the fish is covered with striking blue dots. It’s sexually dimorphic, which means males have prominent points on the middle of the back and above the position of the gill’s opening – something females don’t have. It releases an toxin, known as tetradotoxin. It’s found within the skin and the viscera that render them unappealing to the majority of fish. It is quick to adapt to the aquarium environment and requires plenty of hiding spots that include crevices and rocks. It is not considered safe for reefs due to its tendency to nip corals and can be able to cause poisoning in the tank. It is best kept in a larger fish only aquarium, and it is strongly advised not to include multiple species within one tank. Blue Spot Puffers from Hawaii eat heavily on red algae coralline and green algae, as well as the majority of carnivore preparations. Blue Spot Puffers are a great choice for carnivores. Blue Spot Puffer should never be kept or exposed out of the water since it could be harmful to fish.