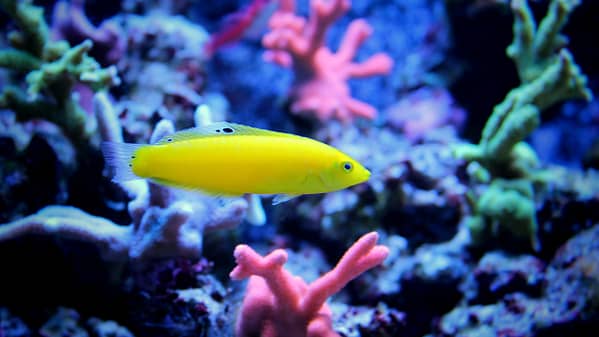 The Yellow Wrasse also called The Golden Rainbowfish, Golden Wrasse, Yellow Coris, or Canary Wrasse is a vibrantly-colored wrasse that is sure to add visual appeal and energy to any aquarium in the marine realm. This Yellow Wrasse is a popular species of wrasse for hobbyists at all levels due to its toughness and small size. It is interesting to note that young and juvenile female Yellow Wrasses have several dark spots along their fins. However, mature adults will have only one spot.

The natural distribution for the Yellow Wrasse is concentrated in the Eastern Indian Ocean, extending to the Western Pacific Ocean including the Solomon Islands and north to Southern Japan, and as south as Rowley Shoals and the Australian coast of New South Wales. This Yellow Wrasse is a reef-associated species, usually found along the edges of reefs in rubble and sand areas.

The best configuration to house your Yellow Wrasse will be a properly-established saltwater tank of at least 50 gallons with a lid that is tight. In order to create the best habitat for your Yellow Wrasse Aquascape your aquarium with live rock, allowing plenty of places to allow your yellow Wrasse to investigate, search for refuge, or hunt in search of food. Make sure you have an extensive area of open substrate, in addition to open spaces to swim in. A layer of sand about 2 inches deep is necessary to give shelter to the Yellow Wrasse while it digs into the sand to enjoy the evening or when scared. Keep the Yellow Wrasse along with other tranquil species of wrasses. This includes the species it is a part of.

In the aquarium at home, the food plan of the Yellow Worm needs to include a variety of food items, such as mysis shrimp, enriched frozen brine shrimp, as well as other meaty food items, high quality marine flakes as well as marine pellet foods. This Yellow Wrasse will appreciate frequent, small-sized feedings all day long.

The Yellow Wrasse is golden-yellow with an black eye spot on the fin’s dorsal. A sealed aquarium lid, with a 2-3 inch sandy bottom for hiding in when scared and other calm Wrasses, such as their own, provides excellent habitat. It can eat fireworms and pyramidellid snails. It also protects the coral reef and clams. Additionally, it could devour the feather dusters of wild shrimp tubesworms, and flatworms. It can be a parasite eater on tank mates.