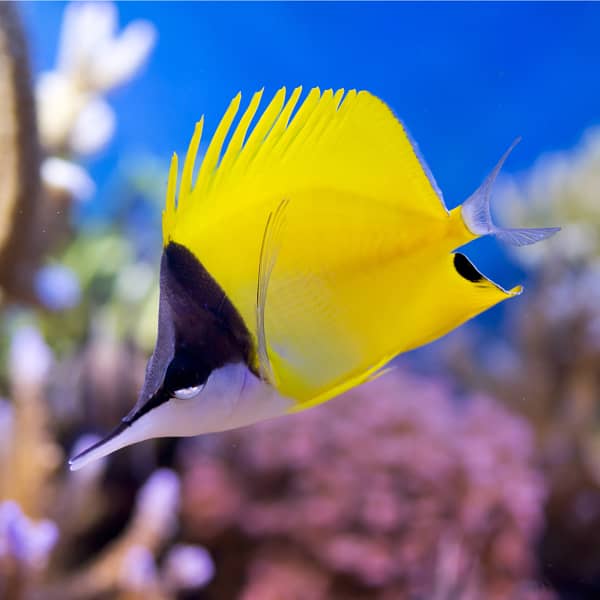 The Yellow Longnose Butterflyfish, or Forceps Fish, can be located in groups or as a single fish on reef flats or slopes in the Indo-Pacific region. Its snout is long which resembles a pair needle nose pliers, which are used for digging food from the crevices between coral heads and in between. It is a Longnose Butterflyfish has a yellow body. The head’s color is split horizontally. The upper part of the head, from the high point of the mouth, to at the very top, is black. The lower part is white. The dorsal spines are lengthy and sharp. It’s a rather big Butterflyfish when in its natural habitat however, it is small in its home aquarium.
It is a good initial purchase of a butterfly, but not the ideal choice for a novice enthusiast. Once properly acclimated, Longnose Butterflyfish is a solid component of any fish-only tank. It’s best to keep it in a 125 gallon or greater tank that has peaceful tankmates. Take care when keeping the species inside a tank that is surrounded by coral reefs because it could nip the corals or sessile marine invertebrates.

It is recommended to feed it an extensive diet consisting of meaty foods, mysis shrimp as well as crustacean meat and frozen food preparations.

Located in schools or as individuals on reef flats or slopes in the Indo-Pacific region. The Longnose Butterflyfish has a long snout shaped like needle-nosed pliers to pick food from the coral’s crevices. Longnose Butterflyfish has a yellow body. The head’s color is split horizontally from the upper part of the head to the highest point of the mouth to up to the crown, which is black. The lower half of the head is white. The dorsal spines are lengthy and sharp. It’s a pretty large Butterflyfish out in nature but is a medium-sized fish in the aquarium in the home.