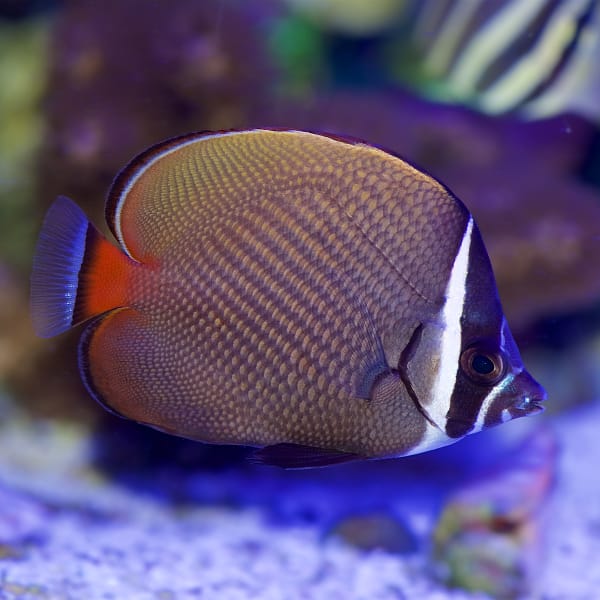 The Pakistan Butterflyfish, also known as Red-tailed Butterflyfish, Collare Butterflyfish as well as Redtail Butterflyfish, has a dark brown-black color that has light-colored scales all over. The mask-like head has two white bands, with black bands that go around the eyes. The tail is distinctive due to its large red band that is followed by white and black bands.
This Pakistan Butterflyfish eats stony corals in the wild. It isn’t recommended to be used in reef aquariums since it can nibble at a variety of corals and sessile invertebrates. A 125-gallon or bigger aquarium is appropriate for a pair that is introduced to the tank together. Otherwise it’s best kept in a single tank with plenty of space for swimming.

The Pakistan Butterflyfish needs a diverse diet, including crustacean flesh, marine fish brine shrimp, frozen meaty dishes. Once it is acclimated into the tank, it will require frequent feedings throughout the day.

The Pakistan Butterflyfish Chaetodon collare can be described as a beautiful fish that is widely found in the Indo-Pacific oceans. It’s an absolute delight for divers and aquarists alike to observe due to its graceful swimming motion and beautiful hues. In nature, it dwells in shallower water at levels of between 10 and 50 feet (3 to 15 meters). Coral reefs are often home to it on the edges and slopes. However, it can also be found among rock reefs in which corals are scarce. The fish lays in a solitary position above its residence and doesn’t seem to be scared by the attention of other divers.

It is a medium-sized butterflyfish, with adults typically growing to 6 1/4 inches (16 cm) in length. The coloring and delicate cross-hatch patterning of the body are stunning. It has a deep chocolate brown body, which is laced with an intricate cross-hatch design with golden spots and is characterized by a prominent vertical white stripe that runs down its face across the cheek. Its most impressive feature is the striking orangish-red tail fin, which is seen at the rear of the adult. This pattern of color has resulted in a variety of common names like Red-tailed Butterflyfish Collare Butterflyfish, Redtail Butterflyfish, Brown Butterflyfish, Collared Butterflyfish and Pakistani Butterflyfish.