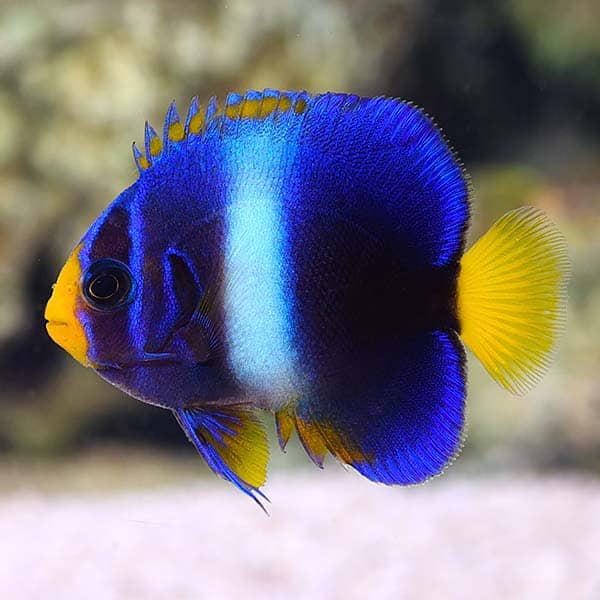 The West African Angelfish is also known as the African Angelfish or Guinean Angelfish. The young ones are beautiful blue color and have a yellow tail. At around 1-1/2 to 2 inches, the juveniles begin changing hue. The edges of the fish will change color and its blue hue will begin disappearing, changing to yellow or olive green.

This West African Angelfish can grow to more than a foot in length, which is why it needs at least 150-gallon of tank space. It’s a robust fish, but it can turn aggressive and is recommended to keep it with other semi-aggressive tank mates. It grazes on live rocks and is known to bite at soft and stony corals (sessile invertebrates) and clam mantles. Therefore, it’s not a suitable choice for an aquarium with a reef.

The diet of West African Angelfish should include vegetables, such as Spirulina and marine algae, meaty foods, and premium angelfish dishes that include sponges. Feed at least three times per day.

The small Juvenile version will have Juvenile colors, the Small-Medium changing color to an early adult. The Large will have Adult coloration.

One of the most valuable precious gems that are brought in out of the Western Coast of Africa, the African Angelfish is sought after due to its amazing beauty and ability to adapt to life in captivity. The past was when the species was not often taken for aquariums because of the geographic location within its native habitat. It’s still among the rarest Angelfish that can be found on the market.

The Guinean Angelfish is considered semi-reef and thrives in aquariums using Live Rock for filtration or decoration. It spends most of its time removing algae as well as other organisms on the surface.