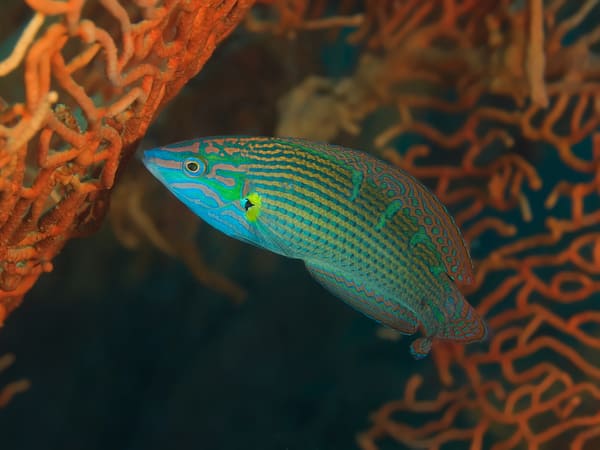 Make sure you put on some shades before you take a look at this amazing wrasse, as the Male Vrolik’s Worasse is a real dazzler. Neon red stripes stand out against the iridescent green and blue body coloring, giving the Vrolik’s Wrasse an intimidating presence. In the “right” light conditions it appears that the Vrolik’s Wrasse appears to glow golden yellow creating a striking visual effect. Halichoeres Chrysotaenia, though appearing like Halichoeres melanurus can be distinguished by its distinctive visible caudal fin. H. melanurus is distinguished by stripes on the caudal fins that create one black spot when compressed.

The natural range of Vrolik’s Wrasse is mostly within the Indian Ocean including the Maldives and Sri Lanka with populations in Myanmar and the west of Thailand along with Indonesia. Although the Vrolik’s Wrasse is a reef-associated fish generally, they can be located in shallow shorelines that are rocky rather than in regions of extensive coral development.

The nutrition for the Male Vrolik’s Worasse must include a variety of foods, including mysis shrimp that are vitamin-rich frozen and vitamin-enriched brine shrimp frozen, and other meaty food items, as well as top-quality marine flakes as well as marine pellets. The Male Vrolik’s Wrasse is a good candidate for frequent, small feeds during the course of the day.

Halichoeres chrysotaenia appears like Halichoeres melanurus, is distinguished by its distinctive marked caudal fin, while H. melanuras is distinguished by stripes on the caudal fins that create one black spot. A tank with a secure lid with a 2-3 inch sandy bottom for hiding beneath if scared or frightened, as well as other peaceful wrasses like its own species, are an ideal habitat.