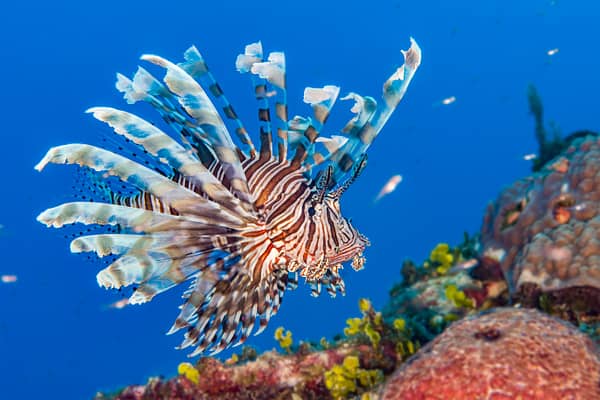 Volitan Lionfish is also known as the Common Lionfish, Red Lionfish, Turkeyfish and Butterfly Cod. The color of the fish varies based on the maturity and age of the fish. It displays a burgundy to red and white to black vertical stripe throughout the entire body. Also, it has huge pectoral fins that resemble fan-shaped, as well as long spines with banded bands in the fins of its dorsal side. Volitan Lionfish is very similar to the Miles Lionfish with the exception of their origins in that the Miles Lionfish species is restricted to the Indian Ocean: Red Sea, South Africa, and eastwards to Sumatra. The Volitain fish differs from the visually identical Miles Lionfish in that Miles has fewer spines in its dorsal as well as anal fins.

The spines of the pelvic, dorsal and anal fins can be poisonous and are used to protect. When a person is stung, the effect is similar to that of a bee sting, but it is stronger. Lionfish venom is a source of proteins that are broken through heat, preventing them from circulating into the bloodstream. After a sting, take out any spines that are broken and lodged in the wound. immediately submerge the area affected in the warmest water that you can stand (not scorching) for 30 minutes. This should be followed by medical treatment. For those who are sensitive to stings, it is best to seek medical attention.

The Volitan Lionfish can grow rapidly to a size of around 15 inches and once fully grown, these fishes need to be kept in a 120-gallon or larger aquarium that has plenty of hiding spots. It can hide when it is adjusting to its new environment however, it is then exposed to the elements. It could consume smaller shrimp, fish, as well as other crustaceans within the aquarium.

When it is first introduced to the aquarium Live shrimp that feed on saltwater is recommended to lure the fish to consume. Its diet should contain fleshy food items like fresh shrimp and live fish and occasionally, crustacean flesh. After settling into an aquarium with perseverance and diligence, Volitan Lionfish can convert into eating a cooked diet that consists of pieces of uncooked, fresh seafood, silversides frozen, and frozen squid.

The Volitan Lionfish, Pterois volitans and also referred to as Lionfish, Red Firefish, Turkeyfish as well as Butterfly Cod, is a beautiful solitary fish species. It has vertical stripes on its body in red/burgundy/white and has massive pectoral fins. As one of the largest body Lionfish is sure to be a focal point in your aquarium reef.

It spends most of the time in caves during daylight hours but at dusk and dawn, it will emerge and display. The Volitan Lionfish should be kept in tanks with lots of rock to give it a retreat area, as well as an ample area for Lionfish to stretch around and swim. If you are keeping more than one Lionfish in a single tank must be considered with caution when doing so, and it is necessary to have a bigger tank and the Lionfish must be the same size and placed in the same tank to prevent aggression. This Volitan Lionfish is venomous so it is best to be cautious when handling it as the pectoral spine of this fish can deliver a sting that is reminiscent of the sting of a bee.