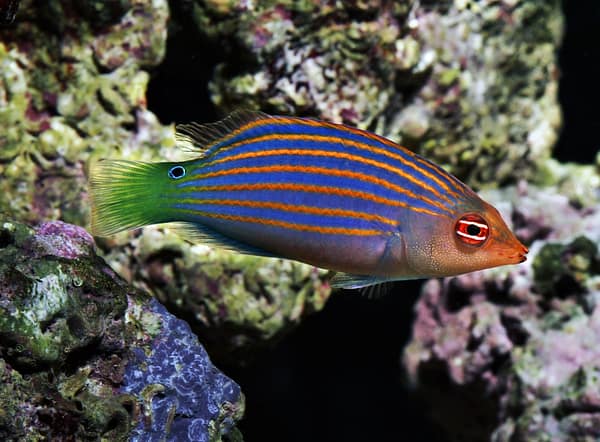 The Six Line Wrasse is beautiful and active. With its distinct horizontal blue lines arranged with an orange-colored body, this species belonging to the Labridae family adds a splash and coloration to your aquarium with a marine reef. This is particularly evident when a male who is courting Six Line Wrasse shows an increase in the intensity of color. But, it’s the darting action among corals and rock outcrops that attracts this Six Line Wrasse to anyone who sees it.

The Sixline or Sixstripe Wrasse, Pseudocheilinus hexataenia is a reef species native to the Indo-Pacific and the coastline of Fiji. The Six Line Wrasse grazes among corals and rocks in search of food but mostly stays to itself. In the aquarium at home, the Six Line Wrasse will require peace and tranquility, as well as an abundance of hiding spots and live rocks on which they can hunt to find food. The Six Line Wrasse is searching for live food in the form of tiny crustaceans like Pyramidellid snails (clam parasites) as well as urchins and flatworms that are commensal. It is also well-known for feeding on unwelcome creatures living on rock, including bristle worms.

Though generally peaceful, the Six Line Wrasse can be aggressive with peaceful Wrasses as well as other fish that are easily intimidated, particularly in the event of inadequate nutrition or its habitat is devoid of places to be able to hide.

Six Line Wrasse requires a diet of vitamin-rich mysis shrimp frozen and vitamin-enriched brine shrimp that are frozen, as well as other meaty food items, along with the highest quality sea flake and marine pellets.

Approximate Size of Purchase: 1″ to 3″

The Six Line Wrasse is beautiful and active. With its distinctive horizontal blue lines strewn on an orange body, this species belonging to the Labridae family provides a pop and coloration to your aquarium with a marine reef. This is particularly true when a male courting Six Line Wrasse shows an increase in the intensity of color. But, it’s the darting around coral outcrops and corals that draws this Six Line Wrasse to anyone who sees it.