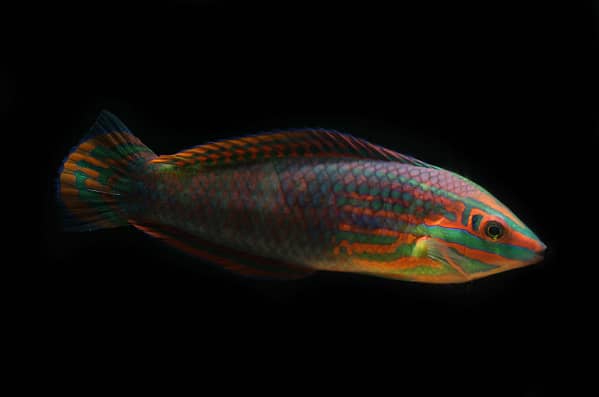 Beautiful, bold and full of character, the gorgeously-striped Red Lined Wrasse is the ideal feature for your aquarium display. Also known as the False-eyed Biocellate Wrasse The young Halichoeres biocellatus and subadults can be identified by the pair of ocelli which are also known as “false eyes” that are located on the dorsal side of the fin that fade as the Red-Lined Wrasse grows older.

The Red-Lined Wrasse is the ideal for a reef aquarium. Juvenile Halichoeres biocellatus as well as sub-adults are easily identified by the Ocelli on the dorsal Fin that disappears as they grow. In your home aquarium try to recreate the seaward reefs made that consist of mixed corals and reef rock, with sand patches. The Red-Lined Worms prefer to live in reef crests and slopes that are on rubble-algae or rocky substrates. An aquarium that has a snug-fitting lid and a 2-3 inches sandy bottom that they can hide beneath if they are scared makes for an ideal habitat. Keep it in a tank together with other peaceful wrasses including other Halichoeres biocellatus.