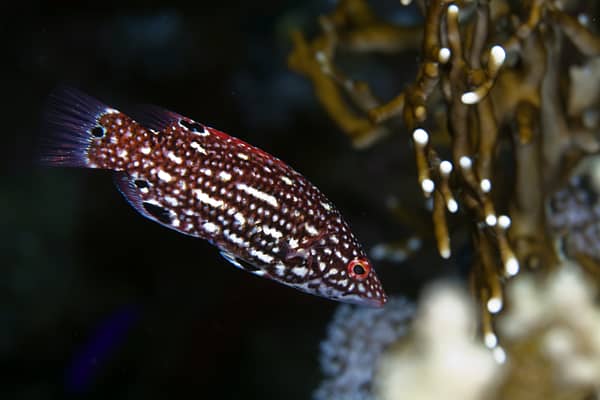 The Red Diana Hogfish, also called Diana Hogfish, Diana’s Hogfish or the Spotted Hogfish, is a reddish-orange hue with white spots in the back of the dorsal fin. A 150 gallon or larger aquarium with lots of hiding spots will provide the perfect habitat. The Red Diana Hogfish is extremely violent and should not be kept with small, gentle fish which can be easy to bully.

Diana’s Hogfish, Bodianus diana is often referred to in the form of the Red Diana Hogfish, Diana Hogfish, Red & Gold Hogfish also known as Spotted Hogfish. It has a body that is red/orange which is adorned with spots of white on its rear, and a scaly texture. Juveniles are colored differently and gradually develop into patterns and colors of Diana’s adult Hogfish.

They are a bit dangerous and should not be kept in tanks with small, delicate fish or with vulnerable sessile inverts. Diana’s Hogfish is best kept in tanks of at least 50 gallon that contain plenty of living rock far from others Diana’s Hogs to prevent territorial aggression. They should be fed a carnivore-based diet.