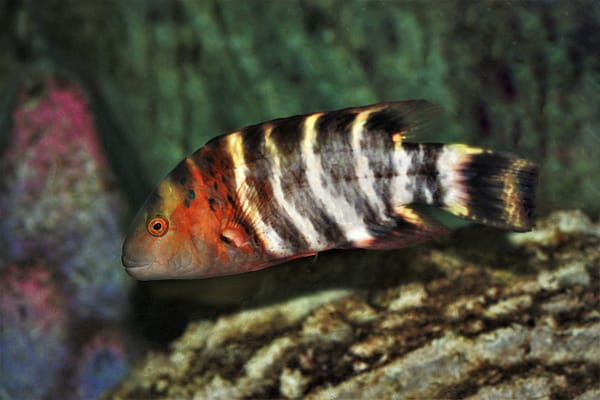 The rare Red-Breast Wrasse sometimes referred to as Redbreasted Maori Wrasse, is guaranteed to draw attention the next time your friends come by. Although its size is impressive the Red Breast Wrasse has seven or six vertical stripes of white on a reddish brown body and a stunning yellow-orange splash of color around its pectoral fin.

Although it is true that the red breast wrasse is not a small fish, they are usually shy and should be kept in a large and appropriate aquarium together with other fish that aren’t aggressive and need to be protected from other fish. They have been known to move the sand in search of food, and they will also eat hard shell inverts and occasionally smaller fish.

The Red Breasted Wrasse Cheilinus Fasciatus is typically wandering around in the lagoons and inside reefs, around reef edges and rubble piles. They are often found resting on the sea’s bed. Feed them a diet of plankton to mimic their normal diet.

With impressive size, the Red Breast Wrasse has seven or six white vertical stripes on an orange-reddish body. It also has a stunning yellow-orange splash of color around its pectoral fin. Although this species could get quite big, they are typically shy and should only be kept in a large tank together with other fish that aren’t aggressive to be protected from being harassed. They can be seen moving the sand to find food, and are known to eat hard shell invertebrates and occasionally tiny fish. The Red-Breast Wrasse can be wandering around in the lagoons and inside reefs around reef edges, and in rubble piles. They are often seen lying on the sea bed.