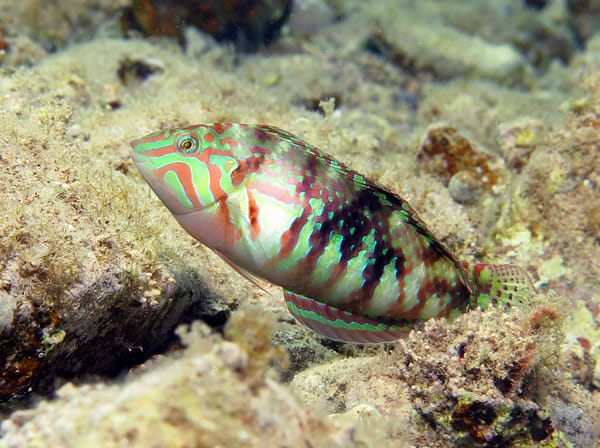 The Nebulous Wrasse (Halichoeres nebulosus) has a range of shades, with intricate patterns and sometimes bold mottling. This helps it blend into structures, rocks, and algae that are weedy. Although the patterns and colors might break the ocelli, also known as an eye spot is visible at the center of the dorsal fin. Males of mature age have pink spots beneath the eye, and females have pink spots across the abdomen.

The Nebulous Wrasse can eat fireworms and pyramidellid snails. They safeguard corals and clams that do not bother. But, bigger specimens could devour smaller crabs and shrimps with ornamental shells. Additionally, it could consume feather dusters, small shrimp, tubeworms, and flatworms. It can be a parasite eater on tank mates as they grow. A Nebulous Wrasse diet must consist of mysis shrimp that are vitamin-rich frozen, Vitamin-rich frozen brine shrimp and other meaty food items as well as a high-quality sea flake as well as marine pellets.

It is found as a single species or in small groups, shallow, inshore areas, and shorelines that are rocky, on reef margins, and reef flats and lagoons.