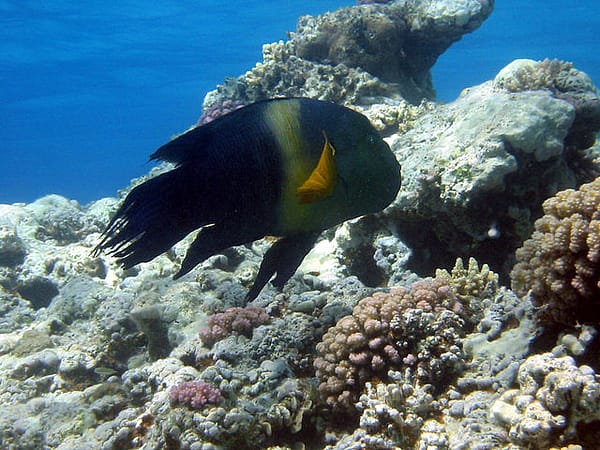 The diet of the Black-backed Worms should consist of vitamin-enriched frozen mysis and vitamin-enriched brine shrimp that are frozen, as well as other meaty food items, in addition to the highest quality seafood flake, and marine pellets.

Please note: We promise that ALL aquarium species we sell will arrive in good health. However, due to the higher degree of attention required for this specific species, it is designated “Expert only.” This species is suggested only for aquarists who are experts or zoo or research institutions. Expert-only aqua life is exempt from our guarantee for a period of time after their arrival.

The Black-backed Wrasse (Anampses neoguinaicus) is a medium-sized wrasse that stands out with its simple appearance. It has an elongated body that is adorned with anal and dorsal fins that are nearly the whole distance of the fish. To the rear of both fins, there is a huge deep blue eye spot that aids to protect the fish when it is a juvenile. They are predominantly white, with a few vivid blue dots. The top portion of this fish has black-blue in its coloration, giving rise to its name. The Black-backed Wrasse needs a huge aquarium that has plenty of live rocks to hide in and in search of food, although they don’t require a sand bed. They can be kept in groups when they are young, but they could be aggressive towards each other after they have matured. They shouldn’t be kept in the same enclosure as invertebrates because they may eat the fan worms as well as ornamental crustaceans and tridacnid clams.