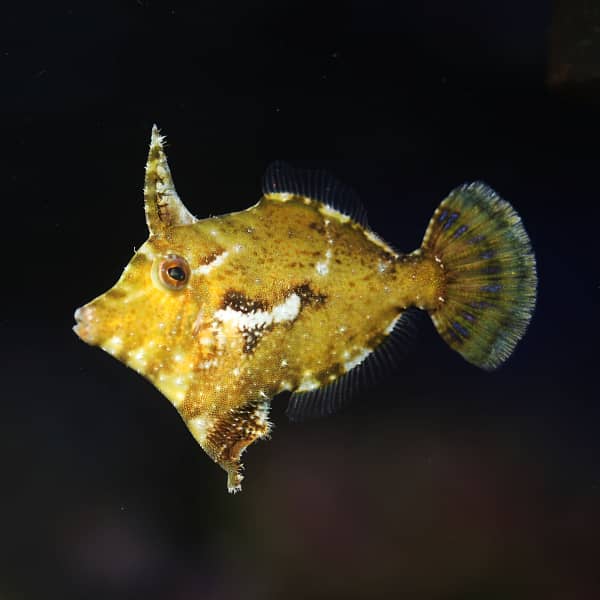 Aiptasia eating Filefish Aiptasia is sometimes referred to as the Bristletail Filefish, Matted Leatherjacket, Tomentosus Filefish, or Matted Filefish. The body is tangled brown, green, and tan in color.

This is an extremely shy species and is rarely aggressive with other fish, except for those belonging to its particular Genus. It is ideal for aquariums that are 30 gallons or larger that do not have tiny invertebrates.

Aiptasia eating Filefish Aiptasia is well-known for its consumption of Aiptasia anemones that are found in your home aquarium, however, it usually is a biting force on soft and stony corals too. The diet should consist of shredded shrimp, squid, mysis shrimp, scallops frozen-dried krill, with a vitamin supplement as well as the frozen sea algae. The Matted Filefish needs to be fed small portions of food multiple times each day.

The fish are reported to spawn in captivity and males are usually larger than females. They have bristle-like hairs that are fine on each side of their bodies down the caudal pedicle or at the base of the tail.

Information on the Aiptasia Eating Filefish

When compared to brighter-colored reef fish that are kept in tanks the matted, lowly-colored filefish may appear unappealing and dull, however, what it is lacking in the way of show-stopping vibrance, it makes for it with personality, character, and help in the tank.

At first sight, the most prominent physical characteristics are the large dorsal fin that is like a triggerfish with two extremely sturdy ventral fins, and a fan-shaped tail.

Their skin is rough, with the olive-drab-colored mottling which is employed to conceal and appears like they’re painted for military use. The brightness and darkness of their colors will vary in the course of the day based on the conditions and the equivalent for fish of their mood and their proximity to cover, causing their coloration to blend into the background (when they’d like to). Although their colors aren’t the brightest of tanks, they are a great contrast that draws your attention as well as the attention of your guests.

While they are doing this their eyes are moving around scanning the underwater landscape for an opportunity to consume. At times, they glide slowly over the rocks as they stare at the rocks with such a keen eye at their surroundings, they appear to be taking note of the pros and cons of every and every nip. It is a fascinating and welcome behavior when contrasted with the constant, frantic eating of tangs as well as other fishes.

As their name implies (or clearly says) Aiptasia-loving fish usually eat the pest aiptasia that is feared also known as glass anemones. However, there is no guarantee that the fish will hunt the dreaded anemones, and it is important to remember that they are not the only thing they’ll eat.

Acreichthys Tomentosus can also be found eating live meaty food items, such as blackworms, meaty frozen food and there is a report that they also eat pellets.

Don’t count that this particular fish will meet its nutritional requirements by eating aiptasia all on its own.

It is important to remember that this fish is somewhat shy when compared to the more lively and vividly colored reef fish. It is suggested that you are attentive during feeding times to ensure that they’re getting enough food to eat. You can also target feed them, in the event that it is necessary, by making a puff of meaty frozen food towards the aggressive fish, and after that, a smaller, more specific ‘puff’ in the opposite direction to the filefish, to ensure that they are getting enough to consume.