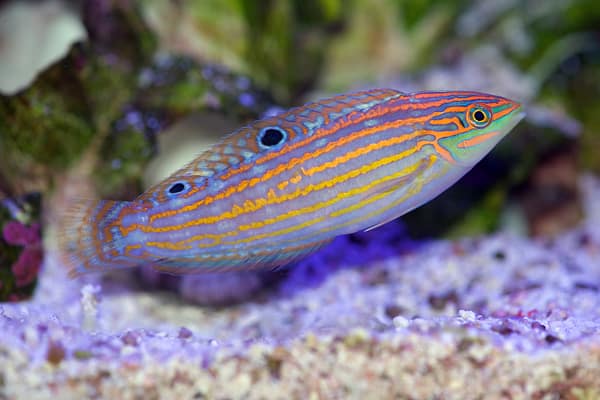 The Adorned Wrasse is an exquisite colorful wrasse with a lot of personality. The two-spotted beauty is adorned with sparkling tangerine stripes that run across an emerald green body that gives the Adorned Wrasse an enthralling appearance. The contrast in color and intricate markings of Adorned Wrasse inject exceptional visual appeal for any aquarium with marine fish. Under “right” lighting conditions, mature Adorned Wrasses seem to glow in a bright orange, creating an amazing and surprising visual effect.

The best setup that will work best for an Adorned Wrasse will be a properly-established saltwater tank of at minimum 50 gallons with a secure lid. In order to recreate the natural reef, you should fill your aquascape with live rock, and be sure you have plenty of crevices and nooks for your squid to explore, hide or hunt in search of food. It is important to provide an extensive area of open substrate and also open areas for swimming. A layer of sand about 2 inches deep is necessary to give shelter to the Adorned Wrasse when it digs into the sand in the evening or when scared. Place the Adorned Wrasse along with other tranquil species of wrasses. This includes the species it is a part of.

The diet for the Adorned Worasse is to include an assortment of foods, including mysis shrimp with vitamin enrichment frozen as well as vitamin-rich brine shrimp that are frozen, as well as other meaty food items, as well as premium marine flakes and pellets. It is believed that the Adorned Wrasse will benefit from regular small meals all day long.

The Adorned Wrasse (Halichoeres cosmetus) makes the perfect addition to any reef aquarium. This beautiful two-spotted fish has iridescent tangerine stripes that cover a blue-green body. For your home aquarium attempt to reproduce marine reefs that are made up that are composed of mixed coral as well as reef rock, with sandy patches. The Adorned Wrasse is also known to be found on reef crests as well as slopes that are surrounded by rubble-algae or rocky substrates. A tank with a tight-fitting lid and a 2-3 inch sandy bottom that they can hide in case of fear makes the perfect environment. Place it in a tank with other peaceful creatures like wrasses.