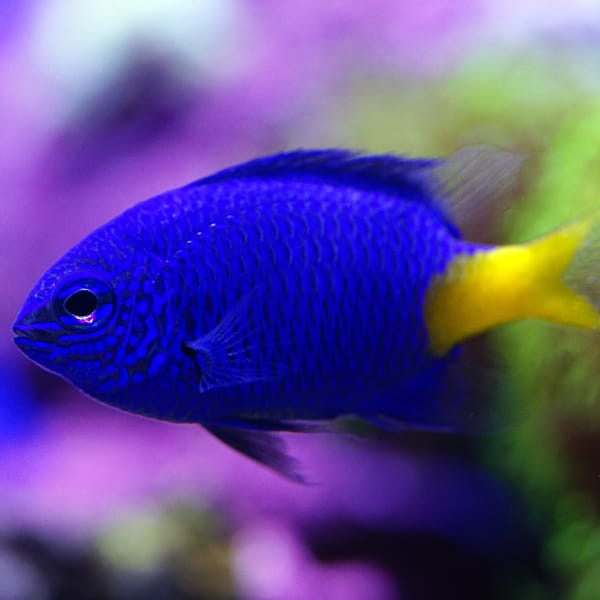 The Yellowtail Damselfish is extremely hardy and stunningly colored. In fact, Chrysiptera parasema is considered by many aquarists, both beginning and experienced, as the most beautiful damselfish. This is due to the fact that its blue-blue body is complemented by a vibrant yellow tail. The stunning color scheme looks amazing against any background of live rock and corals. What is most appealing to aquarists is the fact that the Yellowtail Damsel isn’t as aggressive and doesn’t require the same size of aquariums as some other Damsels.

The reefs that it inhabits are located in the Indo-Pacific region, this species of the Pomacentridae family likes to have numerous hiding spots and tranquil tankmates. Although most Yellowtail Damselfish avoid invertebrates, fish, and corals, some might be territorial to their own species or similar-sized fish. This Yellowtail Damsel is best kept in small groups of oddly numbered fish in a suitable size system.

Also known as the Yellowtail Blue Damselfish or Yellowtail Demoiselle sometimes mistaken to the Azure Damselfish C. Parasema feeds upon algae and zooplankton within the aquaculture. For optimal care, it should be provided with a variety of meaty meals, including mysis, and vitamin-rich shrimp. It is recommended to provide a variety of smaller daily meals.

The Yellowtail Damsels are bred in captivity. While they can be difficult to seduce, males are typically bigger and slimmer and can be aggressive towards females once they are ready to mate. But the female Yellowtail Damsel is the one who ultimately takes charge of the care and protection of the eggs. The male will be very territorial when taking care of his young.

The Yellowtail Damselfish is extremely hardy and stunningly colored. In fact, Chrysiptera parasema is considered by many aquarists to be a great aquarium fish for advanced and beginners.