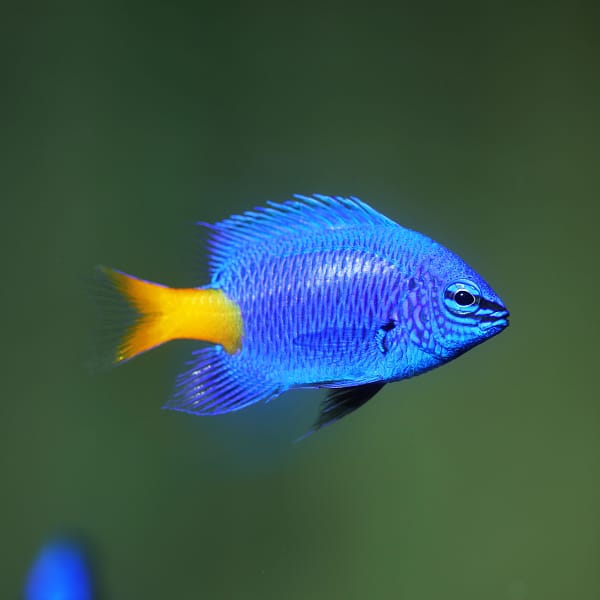 Like the popular Yellowtail Damselfish, Pomacentrus similis looks like an electric blue jewel of the aquarium with a beautiful yellow tail. This color combo looks stunning against any background of live rock and corals. What is most appealing to aquarists is the fact that this Similar Damsel is less aggressive and doesn’t require as big of an aquarium space as some Damsels.

Originating from the coral reefs of the Maldives this member of the Pomacentridae family is a fan of multiple hiding areas and calm tankmates. While most Similar Damselfish disregard the other species of fish, invertebrates, or corals, a few may be territorial toward their own kind. This Similar Damsel is best kept in small groups of odd-numbered fish in a suitable size system.

The Similar Damsel requires a 30-gallon or larger tank that has numerous hiding spots. It may be aggressive toward its tankmates.

Similar to the popular aquarium fish Yellowtail Damselfish, Pomacentrus similar is a stunning blue jewel of the aquarium, sporting a sunny yellow tail. The stunning color scheme looks amazing against any background of corals and live rocks. What aquarists love most is the fact that the Similar Damsel is less aggressive and doesn’t require the same size of tank as some Damsels. Primarily found in the reefs of Maldives This member of the Pomacentridae family favors many hiding spots as well as peaceful tankmates. Although most Similar Damselfish disregard any other invertebrates, fish, or corals, some might be territorial toward their own species or similar-sized fish. This Similar Damsel is best kept in small groups of oddly numbered fish in appropriate-sized tanks.