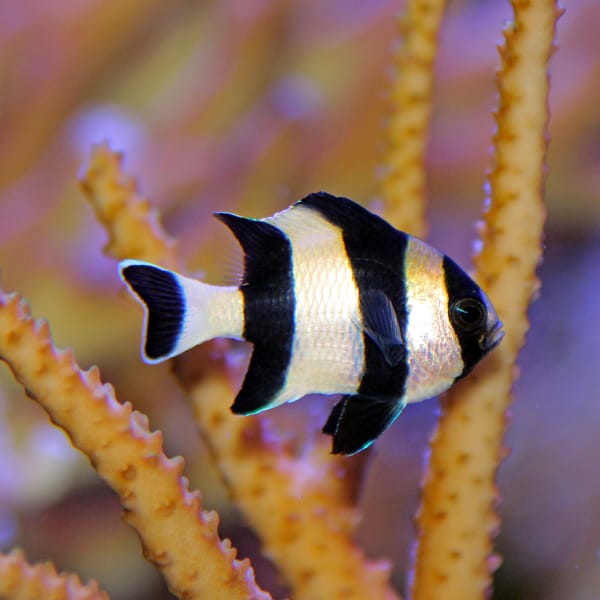 The 4-Stripe Damselfish, also known as Blacktail Dascyllus, Blacktail Damselfish as well as Blacktail Humbug, is a very popular fish. Three white and black vertical bands comprise the body’s coloring and a fourth black stripe that ends on the back.

A 30 gallon or bigger aquarium that has many hiding places is the ideal tank. Because of its aggressive nature in adulthood, it can be found in a tank with other tank mates that are aggressive. It is not likely to harm the invertebrates nor disrupt the tank’s environment.

these saltwater fish require a diet that includes a variety of meaty foods as well as herbivore-based preparations and flaked food items.

They are located throughout the Western Pacific, from Sumatra to Vanuatu and northwards towards the Ryukyu Islands in Japan. This species is also located Southwards and all the way into New Caledonia and Tonga. The Four Stripe Damselfish is a part of the Pomacentridae family. In appearance, they have an array of four black bars as well as three white bars, and an area of white above the lip. The Black-Tailed Dascyllus typically grows to a maximum of three inches. It also eats minced meaty food items that are finely chopped. It is advised to feed the Four Stripe Damselfish only in small quantities several times per day. The species is generally hostile, particularly when they grow older. Therefore, it is best to keep them in a tank that is shared with other fish that are aggressive. Black-Tailed Dascyllus do not harm any invertebrates or cause any damage within the tank.