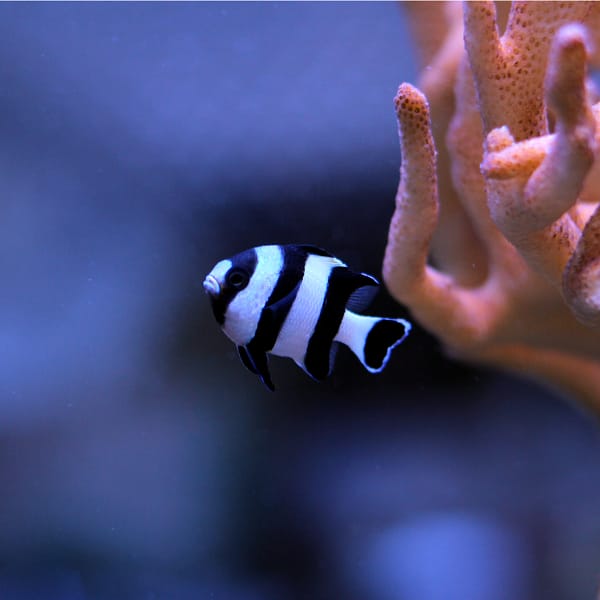 Three Stripe Damselfish, also known as the White-tailed Damselfish and Humbug Dascyllus, is a well-known fish. Three striking black bands are separated by white stripes with an additional white bar to cover the tail.

A 30 gallon or bigger aquarium with lots of hiding places is recommended. Because of its aggressive nature when it is an adult it is likely to be able to coexist with slightly aggressive fish. It won’t hurt invertebrates nor disrupt the tank’s environment.

The Three Stripe Damsel Dascyllus aruanus is indigenous to Indo-West Pacific and its geographical range extends all the way from East Africa and the Red Se. They are found on staghorn Acropora thickets in large numbers and in smaller groups on coral heads. In its early stage, this Three Stripe Damsel is a co-habitant with sea anemones however they do not have this characteristic when they turn into an adult mature fish. This Tree Stripe Damsel is white in color and is decorated with three bars of black. Three Stripe Damsel also features an enormous brown spot that is located in the dorsal portion of the snout. The pelvic fins of the fish are black while the caudal fins are pale while the pectoral fins are transparent. Because of its ease of cleaning and its low maintenance, the Three Stripe Damsel is an ideal choice for aquarists who are new to the sport. As it grows it could become territorial. You can stop this from occurring by introducing the fish as the last one to a tank. If they are introduced in the first place, they may not permit other fish to remain long within the aquarium. It is suggested to fill your aquarium with fresh rock. They are intended to serve as hiding places for damsels, also for other fish. The small 3 Stripe Damsel is expected to primarily reside around rocks.