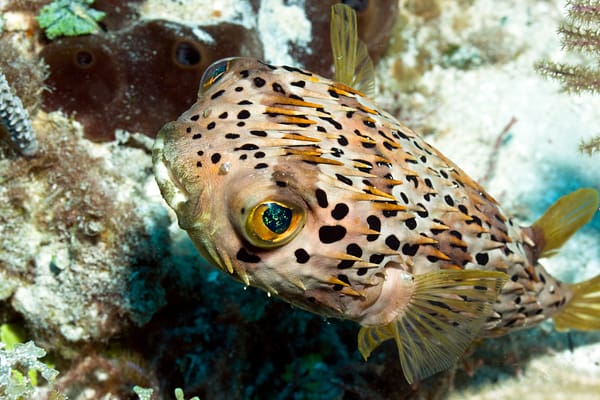 The Porcupine Puffer is often referred to as Porcupine Fish, also known as Porcupinefish as well as the Porcupine Pufferfish. It has spiny appendages that make up the majority of its body. Its color could range from lighter gray or mottled tones often having dark spots. The teeth of the animal are in fact a fused beak-like structure. Porcupine Puffer lacks pelvic fins however, it has learned to utilize the pectoral fins to move around.

A larger or 180-gallon fish-only tank with a solid protein skimmer can be a good place to live in. It can sometimes be aggressive and may nip the fins of tank mates, leaving a circular-cut as its signature. It can eat invertebrates within the reef aquarium. It is able to, when scared or threatened to increase its body nearly twice the size it is normally. The flesh of the animal is poisonous when consumed.

The Porcupine Puffer demands an extensive diet of meaty foods, including shrimp, squid, krill, and hard-shelled shrimp to aid in the wear and tear of their expanding teeth.

The Porcupine Puffer is a spiny animal with appendages that cover most of its body. Its color can range from light grey to mottled shades occasionally that have dark spots. The teeth of the animal are actually a fusion-like beak. This Porcupine Puffer lacks pelvic fins however, it has learned to make use of pectoral fins in order to move around. An aquarium that is large and fish-only with a solid protein skimmer can be a great place to keep it. It is known to sometimes be aggressive by nipping the fins off tankmates, leaving a circular hole. It is known to eat invertebrates within the reef aquarium. It has the ability to inflate its body up to nearly double the size it is normally when threatened. The flesh of the animal is toxic if they are consumed.