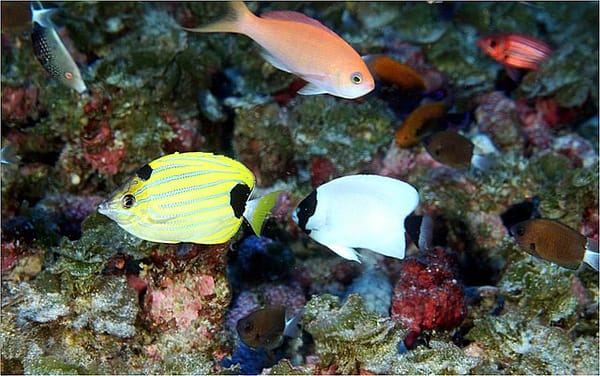 The Pearly Wrasse features an attractive body color that is sage-green and decorated with irregular scribbles. This coloring allows the Pearly Wrasse to blend in with the weedy or algae covered reefs which are often seen particularly in areas with a high surge. It is one of the many species in which the female and juvenile stages are similar to each other.

The Pearly Wrasse is an invasive burrowing wrasse, well-adapted to consuming benthic invertebrates. This is why the ideal aquascape must include an area that is open so that there is a place where the Pearly Wrasse has easy access to a fine sandy substrate. A depth of 3 inches gives the Pearly Wrasse a suitable place to retreat if they are scared. A lid that is tight and secure is suggested. An aquarium that is established and with a capacity of 90 gallons or more with other tank mates who are passive is the ideal habitat to house the Pearly Wrasse.

It can eat fireworms and pyramidellid snails. guarding corals and clams, which are not a problem for it. But, bigger specimens could devour smaller crabs and shrimp with ornamental features. Additionally, it could consume feather dusters, small shrimp, tubeworms, as well as flatworms. They may be a parasite eater on tank mates as they grow. A Pearly Wrasse diet should include mysis shrimp that are vitamin-enriched and frozen, brine shrimp that are vitamin-rich frozen as well as other meaty meals as well as a high-quality sea flake as well as marine pellets.

The Pearly Wrasse has a beautiful shade of sage green that is embellished with irregular scribbles of pink. This coloring lets the Pearly Wrasse blend into algae or weed-covered reef surfaces, particularly in areas of high surge. The Pearly Wrasse is one of the species that the female and juvenile stages are almost identical. It is believed that the Pearly Wrasse is a burrowing wrasse that is well-adapted to eating benthic marine invertebrates. This is why the ideal aquascape must include an area that is open so that there is a place where the Pearly Wrasse has easy access to a fine sandy substrate. A minimum depth of 2-3 inches will give the Pearly Wrasse with the proper protection if it is scared. A lid that is tight and secure is suggested. An established aquarium along with active tankmates creates an ideal habitat to house Pearly Wrasse.