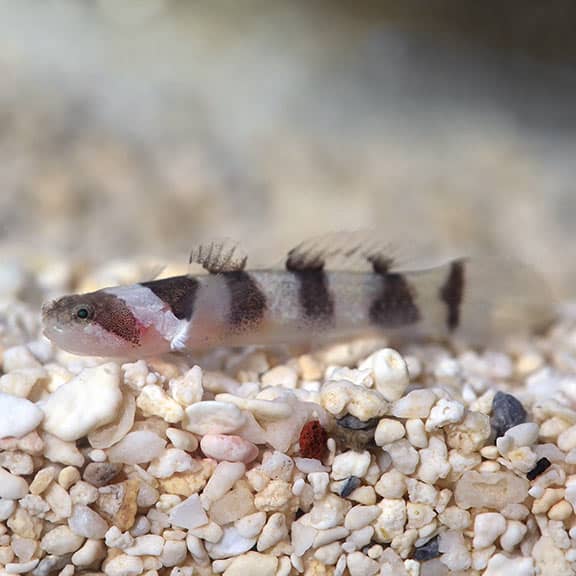 ORA® Captive-Bred Jaguar Goby is a beautiful specimen guaranteed to delight goby enthusiasts and connoisseurs. Despite its small size and its relative insignificance within the aquarium world, the Jaguar Goby leaves a big impression. Although beauty is in the eyes of the beholder, it’s simple to understand the reason why it is that the Jaguar Goby is a visually attractive fish. The striking shape and attractive color pattern draw interest. Dark graphic stripes stand out against a pale yellow body color, giving this Jaguar Goby a primal appeal. Because of its size, it is ideal for smaller aquariums in which its extraordinary beauty can be observed in greater detail.

The ideal setting is an existing marine aquarium of at least 10 gallons, with plenty of reef rocks and a sandy bed. You can think about an aquarium that resembles the rubble zones of reefs with diverse topography. Set up open sand and rubble zones with varying quality or set up the small and medium-sized reef rocks to form a honeycomb tunnel. Like other gobies, ORA® Captive-Bred Jaguar Goby is similar to other gobie and could exhibit aggression towards other species if they are kept together or if the tank is not large enough.

The ORA® Captive-Bred Jaguar Goby is recommended to be fed a diverse diet consisting of frozen and live saltwater shrimps, mysis shrimp, live black worms, and meals for carnivores. It must get fed at least twice each day.

Jaguar Goby Gobiopsis quinquecincta is a small reef fish that appears less primitive than the majority of gobies. The body of the Jaguar Goby is mostly beige, with dark brown jagged stripes that run from the side. This Jaguar Goby has a flatter head, with the eyes positioned above the head. It can grow to 3 inches in captivity and can be found in tanks of all sizes. When you introduce it to your reef aquarium the Jaguar Goby will find its most preferred crevice. The name can sound intimidating however Jaguar Goby is actually quite calm. The only time that the Jaguar Goby will show any indications or signs of aggression are when guarding its territorial waters from species of fish.