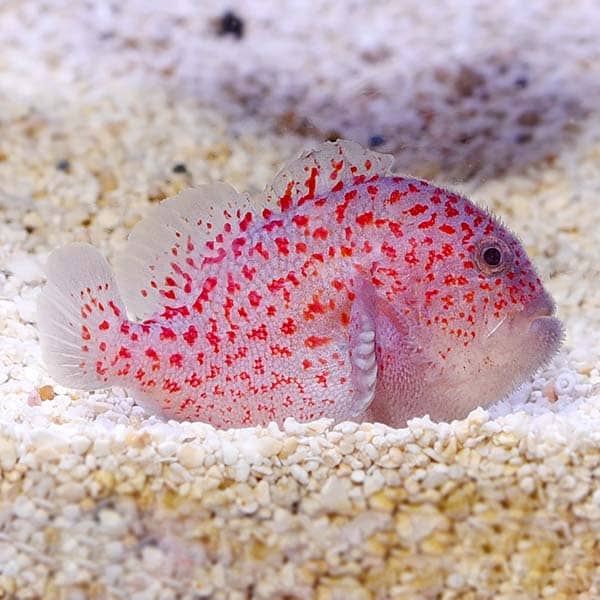 Madagascar Coral Croucher Goby is an exquisite bottom-dwelling fish that has beautiful red and pink coloration as well as speckled markings. It is an intriguing fish that can be located in and around soft and hard corals. With many descriptive and catchy popular names like Gumdrop Coral Croucher, Velvetfish as well as Velvet Goby, it is not difficult to determine what the overall appearance is and behavior of the fish. This Madagascar Coral Croucher Goby possesses an incredibly slim, gumdrop-like body that is compressed vertically, which allows it to maneuver through small areas between coral and reef rubble branches. Its entire body is adorned in fine “hairs” which create the appearance of velvet or fuzzy.

It is believed that the Madagascar Coral Croucher Goby does best when it is housed in an aquarium that is at a minimum of 10 gallons and aquascaped with a large quantity of living rock and rubble, and especially branches of corals or other similar decorations. The goby isn’t known to display aggression towards other fish, however, it is known to fight with its own species when it is in small aquariums. It is therefore recommended for you to manage this Madagascar Coral Croucher Goby singly or as a bonded couple or in a group with other gentle species.

It is not unusual to see it reproduce in your home aquarium. It is important to be cautious when your aquarium is home to Acropora as well as similar SPS corals, as The Madagascar Coral Croucher can produce eggs along the undersides of coral branches. This causes tissue loss in the area of coral. But, in ideal conditions, the coral will regenerate the area of tissue that was lost.

Its diet should comprise a range of brine shrimp frozen mysis shrimp chopped table shrimp, as well as frozen carnivore food preparations. If it is housed within a coral reef that has living corals that branch and corals that branch, it is recommended that the Madagascar Coral Croucher Goby needs to be fed regularly, at least every day using the aid of target feeding, or a feeding tool. If the aquarium is with no substrate, it’ll require multiple feedings per day.

Madagascar Coral Croucher Goby has a striking, distinctive look and behavior that makes it simple to recall. Its body is small and compact, with red and pink coloration scattered across its body like gumdrops or confetti. It can be seen navigating narrow spaces in between the debris of coral reefs using its two fins on the rear of its body as legs to walk through rubble and rocks slowly without getting crushed under it.

It is Madagascar Coral Croucher Goby does best in a 10-gallon or larger tank embellished with lots of live rocks, rubble, and branching corals. It’s not usually antagonistic to other fish however it might squabble with its own species if it is placed in a smaller tank.

If kept in a home aquarium, it’s not unusual to see the Madagascar Coral Croucher Goby reproduce. Be cautious when your aquarium is home to Acropora as well as similar SPS corals because eggs could be laid on coral branches, causing tissue loss around the part of the coral. Under ideal environmental conditions, Acropora may recover tissues lost from the spawning process.

Diet for the Madagascar Coral Croucher Goby should comprise a range of brine shrimp as well as frozen mysis shrimp chopped table shrimp, as well as frozen carnivore food preparations. If the aquarium has live corals that branch, the fish will have to be fed every day with a syringe, or feeding tool. If it is an aquarium with no substrate, it is required to feed multiple times every day.