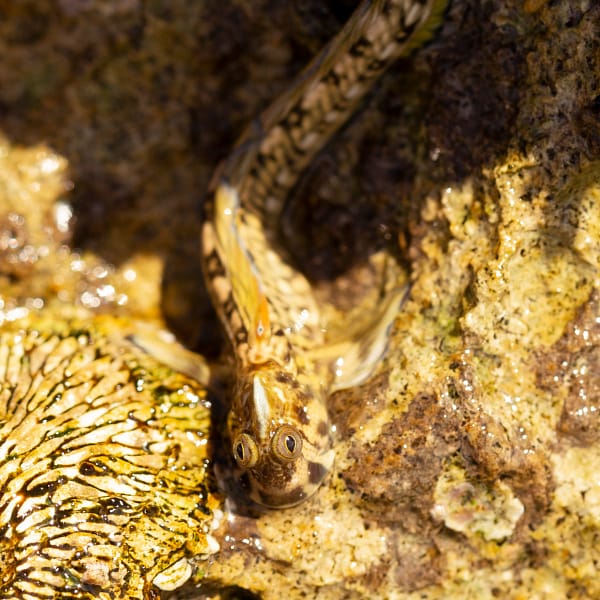 Eyebrow Barnacle Blenny which is often referred to as the Tube Blenny, or Reefsand Blenny is found in The Eastern Pacific, is widespread but it can be found in various locations. Originating from the tip of Baja California and the central Gulf of California; running across central to southern Mexico. The color ranges from dark brown to tan with 10-12 more dark-colored bars. The gill covers feature a large brown oval spot.
A properly-constructed 30 gallon or bigger aquarium with a variety of hiding spots and plenty of rocks is an ideal environment. Eyebrow Barnacle Blenny is a highly entertaining fish since they swim as fast and furious as they can in order to steal food out of the water column while trying to avoid being eaten by other fish. The body of the fish is rarely seen since they usually live in a tiny crevice within the rock. It is an extremely vigilant fish that is constantly looking around the aquarium in anticipation of food.

The Eyebrow Barnacle is best in aquariums with many crevices in rocks to conceal itself. The diet should consist of meaty foods like small pieces of crustacean flesh that have been finely chopped as well as vitamin-rich frozen brine, and mysis shrimp.

The Eyebrow Barnacle Blenny which is often referred to as Tube Blenny, or Reefsand Blenny is indigenous in The Eastern Pacific, it is widely distributed, but can be located in different zones. The origins are from the southern part of Baja California and the central Gulf of California; running between the central and south regions of Mexico. The hue can range from dark brown to tan and has 10 to 12 dark brown bars. The gill cover is likely to have a large brown ocellated spot. A well-established 30 gallon or larger aquarium with plenty of hiding spots as well as rock is the ideal habitat. Eyebrow Barnacle Blenny is an extremely fun fish that can swim at a rapid and frantic pace as they steal food from the water column, while also trying to stay away from being devoured by other fish. Its body isn’t frequently seen as they are typically located in tiny crevices inside the rock. They are extremely active fish, always watching the aquarium and looking for their next meal to arrive.