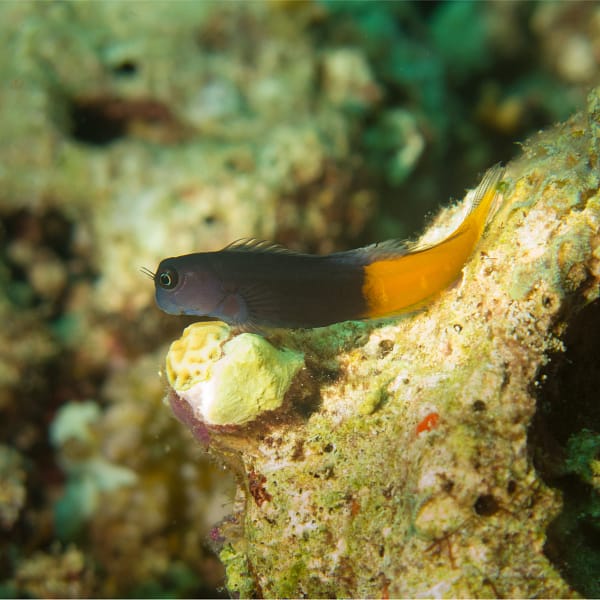 The Bicolor Blenny is also known as the Two-colored Blenny. It is named this way because of the color pattern, the front half of the animal is dull brown to blue and the reverse is orange. Males are typically bigger than females, and they experience several color shifts that include blue during breeding. They are a lot of fun in the aquarium.
Typically, it is found in crevices and rocks at the bottom of their habitat The Bicolor Blenny requires an aquarium of at least 30 gallons, with scattered rocks to perch and conceal.

These fishes are generally tranquil tank inhabitants but are known to attack smaller gobies, other blennies, and dartfish. They’re generally a good accessory to aquariums with reefs however, be cautious in smaller setups or with corals that are smaller in size in the sense that they are recognized for picking at their mantles in clams as well as at large, fleshy corals with stony calcifications when they are not fed. In larger aquariums, they seldom cause harm to corals or the clams.

The diet for the Bicolor Blenny must include vegetables, which includes dried and frozen foods that contain blue-green and marine algae base. The Bicolor Blenny also feeds on (and assists in the control of) algae that grow within the fish tank.

This Bicolor Blenny is so-named due to the fact that the front half is from dull brown/blue while the other half is orange. They have a great personality when in an aquarium. They typically live in crevices or rocks in the bottom of their habitat The Bicolor Blenny requires a saltwater aquarium minimum of 30 gallons and scattered rocks to perch and hide in. They are usually quiet tank members, but have been observed to attack other gobies, blennies, and dartfish. They are generally a great option for reef tanks however be careful when setting up smaller aquariums or when you have smaller corals, since they are known to pick up Mantles on clams as well as at large, fleshy corals with stony calcareous shells when they are not fed. In larger reef aquariums , they rarely cause damage to corals or the clams.