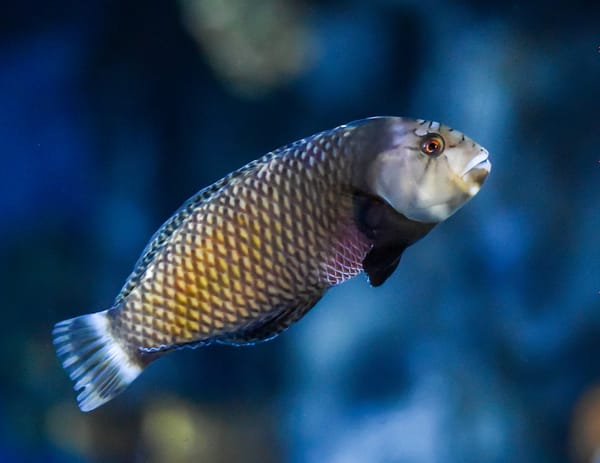 The Dragon Wrasse is also known as the Rockmover Wrasse. The juvenile body color is a mixture of maroon and green, with white markings. The fins are also distinctive in appearance, particularly the two dorsal spines which form the “cow-lick.” The adult doesn’t have massive dorsal spines and has a light blue to green body, with striking dark markings.

It is recommended to keep it in a 180-gallon or larger tank with the bottom being sand-filled with 2-4 inches that it can sink into as it sleeps. It can be kept with fish who are larger or more aggressive than it is. However, it should be kept with passive fish when it is a young one and only house one fish per tank. It shouldn’t be kept in a reef aquarium. When the Dragon Wrasse develops, it will feed on crustaceans. starfish, snails, shrimp small fish, and worms along with other vermi-vertebrates. It also moves corals and rearranges the rocks within the aquarium in order to locate food. The aquarium must also have a tight lid to stop the fish from jumping out.

The Dragon Wrasse young has a burgundy body and white markings. The fins are also distinctive in their appearance, specifically the two dorsal spines which form the cow-lick. Adults do not have large dorsal spines and have a pale green to blue body, with stunning dark markings. It is best to keep it in an aquarium with a 4 to 5 inches of a sand and rubble bottom, in which it is able to submerge itself as its body sleeps on sand. It can be kept with fish who are larger or more aggressive than it is, but it should be kept in a tank with active fish in the early stages of their development it should be housed in a single tank. It shouldn’t be kept in an aquarium with reef fish. Once the Dragon Wrasse grows, it will consume crustaceans, shrimps, snails small fish, starfish, worms, and various invertebrates. It also moves corals and rearranges the rock in the aquarium to search for food. The aquarium must also have a tight fitting lid to stop it from bursting.